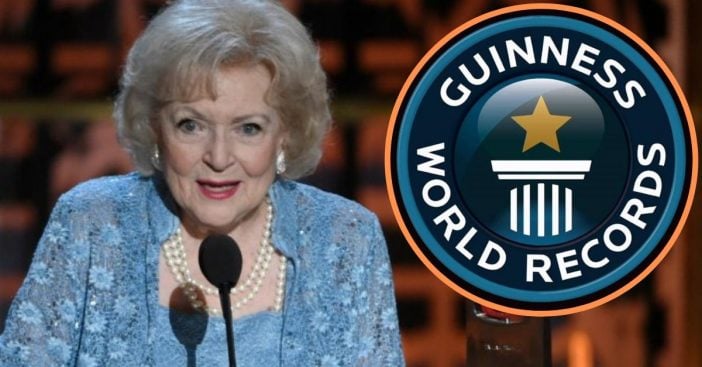 Betty White, who is now 97 years old, has been in the entertainment business since 1939, has not stopped, and has no plans to stop! This is what has helped her claim the spot of Guinness World Record for Longest TV Career for a Female Entertainer. In fact, she has been airing on screen for 80 years, she can now claim the Longest TV Career of any entertainer!

Betty talked to Huffington Post in 2013 about when Guinness called her to tell her about the world record. “I was astounded when [Guinness] called to tell me… Who? Me!? It’s such an honor. The book has always been fascinating to me. I can’t believe I’m now associated with it.”

She was also asked about secrets that people might not know about her, to which she said she was a crossword puzzle addict, a “nature nut,” and confessed to having a crush on Robert Redford.

Betty has appeared and starred on many popular shows throughout the years, including The Golden Girls, The Mary Tyler Moore Show, The Carol Burnett Show, and her own show, The Betty White Show! When asked what her favorite projects to work on were, she responded Pet Set and Golden Girls, which I was totally expecting from this “Golden Girl!”

Especially the former, as I wrote and produced it and could have on any animals I wanted,” Betty said in reference to Pet Set.

Of course, every Hollywood career comes with ups and downs and Betty has managed to overcome any and all obstacles. She recently said the secret to a long life was a diet of hotdogs and vodka, but also to see the positive in everything you do.

“Enjoy life. Accentuate the positive, not the negative. It sounds so trite, but a lot of people will pick out something to complain about, rather than say, Hey, that was great! It’s not hard to find great stuff if you look,” she said.

We absolutely love Betty White! We have been so blessed to watch her throughout the years and we hope she lives many, many more.

Recently, there have been health rumors surrounding Betty White as she goes about her day-to-day life. See the photos of her that have people questioning her health (yet she still looks amazing)!

Previous article: Man Born With Rapid Growth Condition Stands At 7’8″ And Is Defying All Health Odds
Next Post: Do You Remember these 1950’s Classic Dream Cars?