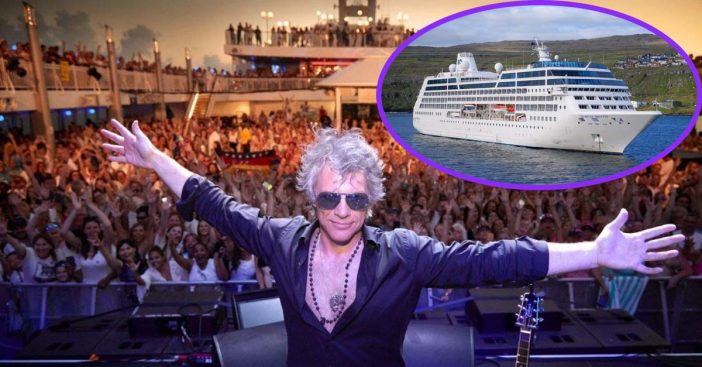 Stories have been surfacing from the Jon Bon Jovi cruise that we reported on a few months ago would be taking place in April of this year. A seasoned cruise-goer who also works at PEOPLE magazine made his way to the celebrity cruise to determine if it would resemble a traditional vacation cruise line or be the exact opposite of that.

Upon boarding Norwegian Cruise Line’s Norwegian Jade ship in Miami, Shay Spence was pretty nervous, but it exceeded his expectations. Whether you’re a die-hard Bon Jovi fan or not, this cruise might be enough to convert you completely.

A breakdown of the Bon Jovi cruise

The first thing Shay noticed was that there was a camaraderie onboard that was much different from your average cruise, and this was chalked up to the connection that everyone onboard shared about Bon Jovi. In addition to the friendly passengers, Shay noted the Norwegian Jade was refurbished in 2017 and, while it is a much older ship compared to the Norwegian Bliss and Norwegian Joy, it still offers ample cleanliness and intimacy.

For the weekend lineup, there were bands like Tonic and Collective Soul, and the man himself that everyone was there for (Bon Jovi) wouldn’t be performing until the following night.

Soon enough, they all had docked in the Bahamas and were getting ready to pick up Bon Jovi! Their port day wasn’t supposed to be until Sunday and ended up being a day earlier, to their pleasant surprise. The night that Bon Jovi was aboard, he played an acoustic storyteller set, answered the audience’s questions, and played some slowed-down versions of his hits.

Shay admits that he knew a lot more songs than he thought he knew!

After that show, Shay went for a meet and greet, and the singer was nice enough to take a photo with him! While they would be dropping off Bon Jovi yet again, he would be back for a real treat onboard the cruise line. Shay calls his second performance “electrifying,” as he was not playing his hits, but rather playing on-point covers of other popular songs.

Many people onboard who were huge Bon Jovi fans said this was the most intimate concert of his that they had been to. The ship only held 2,200 people, so it felt like a real personal experience.

After that once-in-a-lifetime intimate concert experience with Bon Jovi, Shay went to meet him a second time, to which the singer responded, “You’re back.” They shook hands and got another photo together. This would be one of the final days of the trip, as the one following that consisted of an ’80s silent disco and savoring the final moments of being able to enjoy the food at a pop-up version of the Jon Bon Jovi Soul Kitchen.

Shay confirms that this is an absolute bucket-list item for any hardcore Bon Jovi fan. There’s another trip coming up leaving from Spain in August for those who are interested!

Check out this first-hand experience of Bon Jovi singing one of his hits, “You Give Love a Bad Name” aboard the ship!

Take a look at some additional information on the cruise coming in August!

Previous article: Should You Run Or Walk To Burn Fat And Lose Weight?
Next Post: You Can Now Buy Adorable DIY Tiny Homes Under $9000