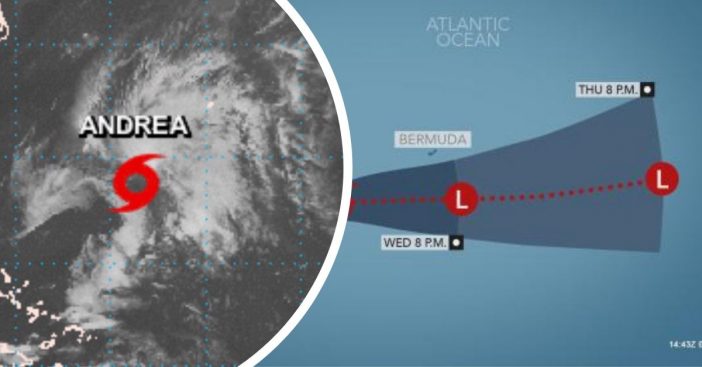 It looks like our first named storm has been confirmed and the Hurricane season has not even begun yet! The official Hurricane season begins June 1st, so it’s not uncommon to see some storms forming a few weeks beforehand. The National Hurricane Center announced the evening of May 20th, 2019 that Subtropical Storm Andrea had formed.

The storm was located halfway between the Bahamas and Bermuda and should not have any impact on U.S. land. Its peak winds are at 40mph right now and moving north at 14mph.

AccuWeather Hurricane Expert Dan Kottlowski lent his insight on the storm and despite it being strong enough to earn its own name, it’s really not that impressive of a storm system and poses no threat.

“This is going to be a very short-lived storm. It probably will not survive past Tuesday night and will definitely be moving away from Bermuda by then,” Dan said, “The impacts [to Bermuda] will be gusty winds, brief heavy rainfall, and rough surf. They have worse winter storms than this will be,” he added.

Dan also confirmed that the lower water temperatures will ultimately break the storm apart, as hurricanes and tropical storms usually flourish on warmer waters. Andrea is moving above waters that are 78 degrees Fahrenheit (26 C), and as she continues to move north, the waters will become much cooler and the storm will diminish.

He advises people to not read too much into early onset tropical storms. “Early-season development like this does not portend what the rest of the hurricane season will bring, especially since this is a weak storm,” he said.

This subtropical storm makes 2019 the fifth consecutive year that we earn a preseason storm, following Ana in 2015, Bonnie in 2016, Arlene in 2017, and Alberto in 2018, according to Science Alert. The graph shown below shows that preseason storms are not an uncommon thing, showing a large range from 1969 to 2018.

If you’re interested in learning more about the first named storm of the season, don’t forget to check out the official weather coverage.

Do you remember all of the major hurricanes from last year? Check out the aftermath of Hurricane Michael from last year, which was a historic Category 5 storm at landfall.

Previous article: Watch Celine Dion Belt Out Some Classics In A Carpool Karaoke Ride
Next Post: Reese Witherspoon Admits She Cried When Her Daughter Left For College