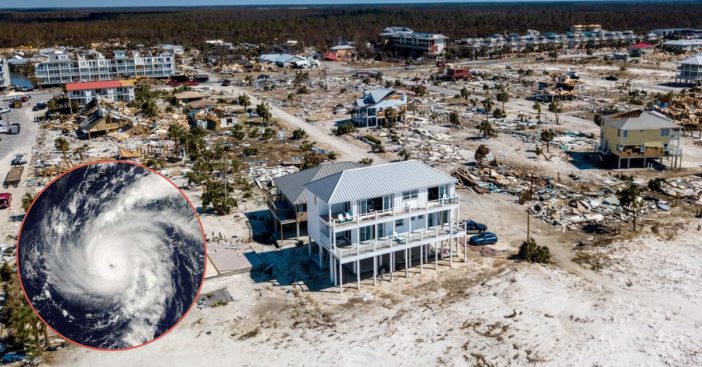 On October 10th, 2018, Hurricane Michael slammed into the Florida Panhandle as a Category 4 hurricane. Its winds extended over 150mph and many areas on the coast as well as inland dealt with tremendous flooding and catastrophic damage. Mexico Beach was one of the main areas that got hit the hardest with roofs being ripped off of houses and houses being ripped off their foundations.

However, among the damage that covers the grounds of Mexico Beach, one house is still standing. Russell King and his nephew, Dr. Lebron Lackey, built what they call the ‘Sand Palace’. It is an elevated house constructed with 40-foot pilings buried into the ground and screws drilled into the walls.

The pilings underneath the house that keep it elevated, in turn, protect the house from storm surge flooding as it just passes right through, directly underneath the house! The two had also installed a security camera on the outside of their property. This footage was their only means of witnessing the storm’s fury as it made landfall right on top of their house.

Dr. Lackey weighed in on his genuine surprise that the house was still standing. “It would buck like an airplane wing. I kept expecting to see it tear off.”

After the storm had passed on, the both Russell Dr. Lackey worked to clean up the debris and wreckage that formed underneath and around their home. According to The New York Times, at least three-quarters of the buildings in the area surrounding the Sand Palace home were damaged. This news meant that their home was the last surviving beachfront home in the area.

“We wanted to build it for the big one. We just never knew we’d find the big one so fast,” said Dr. Lackey.

What makes this story incredibly important is because this lone house is being compared to other houses in the area that have not been built to withstand hurricanes due to their location. Florida’s building code for building windstorm resistance homes was put into effect in 2002, especially for homes along the shoreline.

Despite this being put into effect, since the Gulf has historically not been hit with massive storms in years, many of these homes are not structured to withstand such powerful hurricane force winds. This law was made after Hurricane Andrew slammed into Miami-Dade County in 1992 as a Category 5 storm, requiring the entire southern part of the state to have homes built to withstand 175mph winds.

Be sure to SHARE this article to send love to those affected by Hurricane Michael. Check out the video below of another hurricane-resistant home!

Previous article: You Can Now Buy ‘Golden Girls’ Cereal At Target
Next Post: The Original Big Bird Actor On ‘Sesame Street’ Is Retiring After Nearly 50 Years