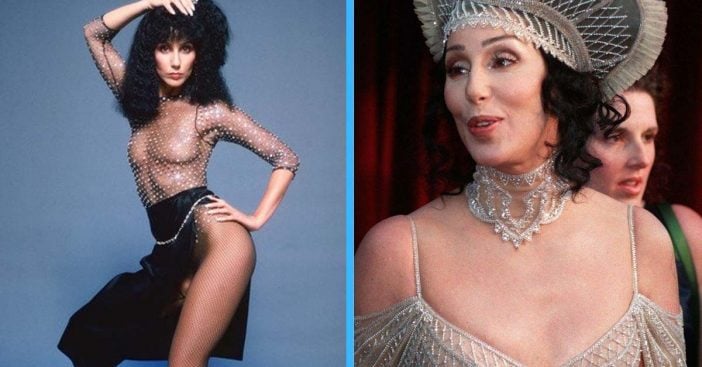 Cher’s birthday just passed and she turned 76 years old, but she looks beautiful as ever! One thing that certainly hasn’t changed about her is her larger-than-life outfits and her shameless confidence as she continues to flaunt them around today.

With The Cher Show having succeeded on Broadway, she must be taken back to her past of flashy and some revealing outfits that make her yearn for yesteryear. Take a look at some of these photos of Cher throughout the years that show how beautiful she still looks even today!

The photo above details Sonny and Cher arriving for the mod party and preview of The President’s Analyst hosted by Paramount and James Coburn Dec. 13th, 1967.

Cher holding her 4-month-old son, Elijah Blue Allman, during a scene from her Christmas show taped in Los Angeles, CA on November 9th, 1976.

The cast of Come Back to the Five and Dime, Jimmy Dean, Jimmy Dean celebrate the debut of the play backstage at New York’s Martin Beck Theatre, Thursday night, Feb. 19th, 1982.

Cher in The Witches of Eastwick in 1987.

The photo above shows Cher performing at London’s Wembley Arena on May 5th, 1992.

Another Cher outfit favorite, Cher arrives at the 70th Annual Academy Awards at the Shrine Auditorium in Los Angeles on March 23rd, 1998.

Cher featured in Larger than Life: The Kevyn Aucoin Story in 2018.

Enjoy our video about all things Sonny & Cher :

Click for next Article
Previous article: Was Prince Louis Just Being A 4-Year-Old… Or A Brat?
Next Post: Prince Louis Steals The Show Creating New Trend At Queen’s Platinum Jubilee