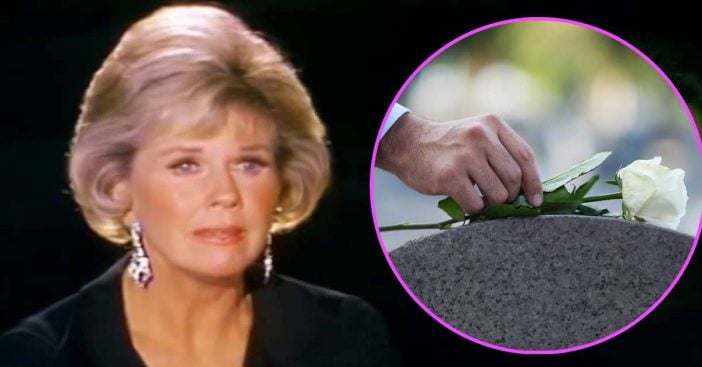 We recently reported that Doris Day had passed away at the age of 97 after contracting a serious case of pneumonia. She had just celebrated her 97th birthday. However, she made it very clear to her manager and close friend Bob Bashara that she did not want a funeral, a memorial, or a grave marker.

Additionally, Doris allegedly didn’t like to talk about anything concerning death. “She didn’t like death, and she couldn’t be with her animals if they had to be put down. She had difficulty accepting death,” Bashara explained.

“I’d say we need to provide for her dogs [after she died], and she’d say, ‘I don’t want to think about it’ and she said, ‘Well, you just take care of them,’” he recalls, “She had several when her will was written, and she wanted to be sure they were taken care of. She didn’t like to talk about the dogs dying.”

Doris was an animal lover and animal welfare advocate, which makes sense as to why she didn’t like to think about dogs and death. She was also raised Catholic and continued to be a spiritual person as she grew older.

“She believed in God, and she thought her voice was God-given,” Bashara says. “She would say, ‘God gave me a voice, and I just used it.’”

While he’s not entirely sure why Doris didn’t at least want a funeral, he says, “I think it was because she was a very shy person.”

“She never let her celebrity affect her and who she was, and she was always the little girl from Cincinnati who was extraordinarily talented and went out in the world and did what she loved to do despite herself. She was guileless, and I had discussions with her about how popular she was, and she would say, ‘I don’t understand it’ about why she was so loved,” Bashara says.

He also reveals that the one thing that kept her going all these years was her foundation, the Doris Day Animal Foundation founded in 1978.

Fans and friends who wish to honor and remember Doris Day have been encouraged to visit the official website of the Doris Day Animal Foundation. That’s probably the best memorial of all!

Be sure to SHARE this article if you will miss Doris Day as much as we will!

Check out the video below of a memorial video crafted by Turner Classic Movies to remember Doris Day by: