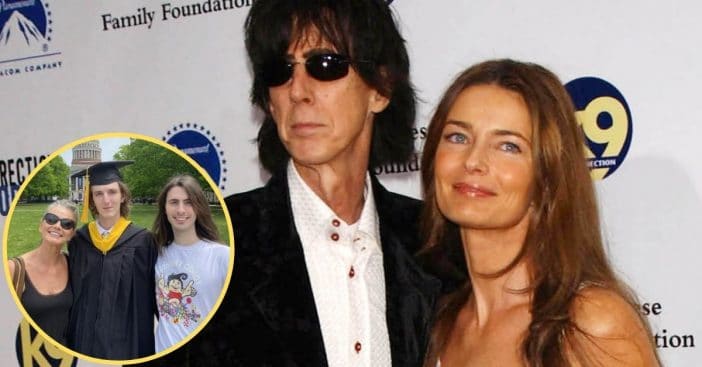 Paulina Porizkova’s son graduated from college and noted that her late husband Ric Ocasek would be so proud of him. “This weekend, I want to send out well-wishes and congratulations to everyone whose children are taking a big step into adulthood,” Porizkova captions a family photo to celebrate her son’s graduation.

“But my heart goes out to all of us who are attending such momentous occasions as graduations – with someone crucial missing,” she continues. “Their absence in these joyous occasions is probably even more keenly felt. They SHOULD be here. There is such a painfully felt hollow where they belong.”

She continues, “Both of our boys graduated on time, with honors, after having the worst year and a half of their lives. I’m so incredibly proud of them. And I know he is too. Together, we’ve raised some outstanding human beings.”

RELATED: Paulina Porizkova Is Still Mourning The Loss Of Ric Ocasek Every Day

Ocasek died back in September 2019 at 75 years old. At the time of his death, Porizkova and Ocasek were estranged after 28 years of marriage, but they had yet to finalize their divorce.

What she’s up to now

Ocasek was found dead in his New York City home that he shared with Porizkova. It was reported that he had died from hypertensive and atherosclerotic cardiovascular disease.

Since the very sad news of Ocasek’s death, Porizkova has absolutely bounced back and has been keeping up her modeling. On top of that, she has a new romance as well! She recently went public with her relationship with writer-director Aaron Sorkin. The two were seen walking the red carpet together at the 93rd Academy Awards.

Porizkova went on to tell The New York Times that their walk on the red carpet at the Oscars was only their second date. In a subsequent Instagram post, she condemned headlines that described her relationship as “age appropriate.” She said, “This has not, by any means, been my first date; only my first public date, and the repercussions are stunning to me. Sure, in private I managed to date men who congratulated themselves on finding me attractive despite my age- while being five to ten years older than I.”

She continues, “But this surprise in the media at my date dating ME is a little disheartening. Talk about ageism. Meanwhile, he is evolved enough to consider himself lucky. Now, THAT’s sexy.”

Click for next Article
Previous article: Mick Jagger’s 4-Year-Old Son Deveraux Looks Just Like His Dad As A Kid In New Pic
Next Post: Willie Nelson Is ‘On The Road Again’ With A New Tour This Summer With 14 Stops