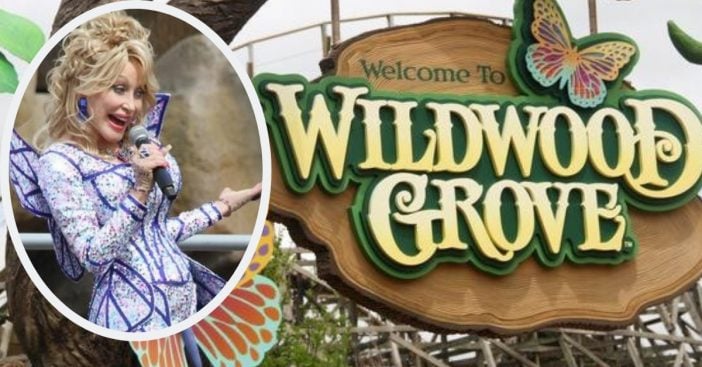 For those of you who didn’t know, Dollywood is a family amusement park based off of country icon Dolly Parton. It’s comprised of both a theme park and a water park for all families to enjoy, including beautiful lodging areas and season passes. Not to mention, every single ride you could ever imagine!

A recent addition to the park just opened, and Dolly was right there to celebrate the grand opening of it. The new addition is called Wildwood Grove, and according to the official Dollywood website, “Wildwood Grove beckons the explorer in all of us. Let curiosity be your guide as you journey ever deeper, past sparkling creeks, through a charming village, and under the mighty limbs of the great Wildwood Tree. This is where adventure takes root and dreams take flight.”

The new area features 11 new attractions, including new rides and a 50-foot-tall Wildwood Tree. The tree is actually covered in light-up butterflies and thousands of colorful leaves! Dolly, as previously mentioned, was there for the grand opening.

“Hi, everybody! How are you today?” Dolly began to the crowd and the park, “Wildwood Grove is the biggest thing that we’ve ever done here at the park.”

“Wildwood Grove just sets a whole new standard for Dollywood because, when I was a little girl, these things here were exactly what I used to dream about. All these bears, all these butterflies, all these bees, and frogs; because we were just part of nature being country kids,” Dolly said of the inspiration behind the new addition to the park.

“I used to pretend like I was flying out of the holler, flying to different parts of the world to see what was out there beyond the holler, and, of course, I was finally able to spread my wings,” she said.

“I am from Detroit. First time here and really excited about it. There’s a lot of people here, so you can tell there’s a lot of momentum in the air, and people are excited to be here today,” says visitor Renee Monforton.

Dolly finished up her speech for the grand opening by doing a Q&A session. Then, with the help of some children in the crowd, she released some butterflies into the air in Wildwood Grove. A truly beautiful moment!

Be sure to SHARE this article if you love Dolly Parton and everyone she’s done with Dollywood!

Previous article: Beth Chapman Says ‘Dog’s Most Wanted’ Will Not Premiere This Year
Next Post: Just In: Former Actress And Singer Doris Day Dies At Age 97