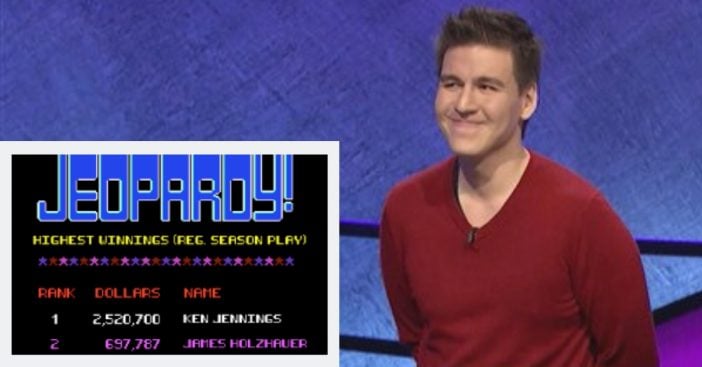 James Holzhauer has been absolutely dominating as a contestant on Jeopardy! and has now been settled into second place behind first-place Ken Jeggings. In just ten episodes, James has been able to take some serious risks that have sky-rocketed him into second place, allowing him to have the four single-highest totals in the show’s history.

Through one episode alone he racked up $697,787. James is apparently a professional gambler, which explains a lot as to why he is slowly climbing up to Jeopardy! totem pole.

The first-place winner of Jeopardy!, Ken Jennings, spoke to Natalie Morales of TODAY about James’ strategy when it comes to the game. “He’s thinking about the game in a whole different way, and I never would’ve had the stomach to make some of those bets he’s making,” he says.

The 34-year-old has moved into second place in less than two weeks on the show. Jennings accumulated $2.5 million in 2004 with a 74-game winning streak.

James is already up to 10 wins! How far will he go? pic.twitter.com/dn1nsUWYkq

So, what are his actual strategies?

According to TODAY, one of his strategies includes “fully doubling down whenever he finds a Daily Double and starting from the bottom of the board to hunt the big money first.”

“He also makes Daily Double and Final Jeopardy wagers with personal meaning. He wagered $9,812 because he got married on Sept. 8, 2012, and bet $11,914 because it corresponds with his daughter’s birthday.” Wow!

James apparently worked incredibly hard for a chance to be on the show. He took the online tryout test 13 times and had 2 in-person auditions! He also said that he practiced his buzzer-pressing skills by putting masking tape around a mechanical pencil. James apparently has watched the show since he was a kid when he would watch it with his grandmother.

James has also said that all his knowledge doesn’t come from a formal education either. The second-place holder says he hated school, “I just studied things I wasn’t good at before, tried to shore up the weak points.”

James is quickly approaching $1,000,000 in total winnings. Will he go the distance? Tune in to find out! pic.twitter.com/GS4G5Tyara

So, what is Ken Jennings’ advice to James who is now approaching a total of $1m winnings?

“I’d give James the same advice I give everybody on ‘Jeopardy!”’ he explained, “Don’t wear a sweater. You’ll look like a dork.” Pretty solid advice from a fellow Jeopardy! winner.

Be sure to SHARE this article if you love watching Jeopardy! as well!

Check out the video below of James talking about his game show success and gambling style:

Previous article: WATCH: Marine Breaks Down Sobbing When He Finally Meets Newborn Son
Next Post: We Can’t Get Over These Adorable New Photos Of Prince Louis For His First Birthday