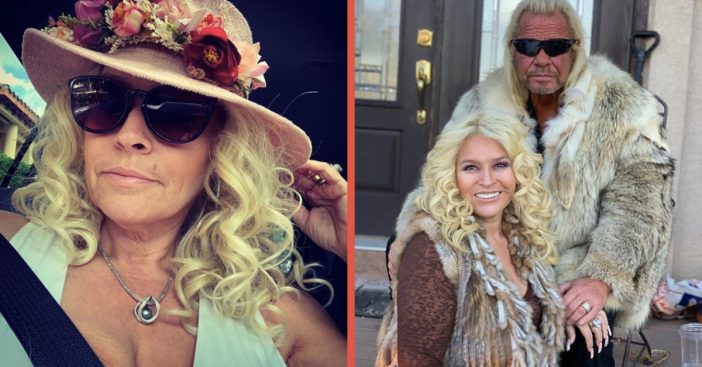 Dog the Bounty Hunter star Beth Chapman has been documenting her cancer battle and health journey on her Instagram account for a while now. She recently posted a photo of herself donning a wide-brimmed sunhat with a crown of flowers along the top. Her platinum curls pop out of the bottom, complemented by her pointed sunglasses and layers of jewels.

A very typical Beth photo! Although there was no caption accompanying the photo, many fans take the new picture as a beacon of hope. Fans were extremely happy with the new photo and made sure to show that love in her comments section!

Beth was diagnosed with an aggressive form of cancer after undergoing surgery to remove throat cancer in 2017. She was rushed to the hospital in November 2018 to remove a blockage in her throat when doctors discovered an ‘incurable’ form of cancer that had returned.

Despite her health ailments, she appears to be in good spirits and she is surely not letting cancer define her outer appearance either! She’s looking absolutely beautiful these days and her fans are quick to remind her of that.

Another fan wrote, “Beautiful strong example of a hero and a fighter. You’re such a great inspiration to so many people… Love you Beth praying for you always.”

One person expressed sympathy for Beth’s health issues, saying, “I am so sorry for what you and your family are going through. You all are in my prayers. I have been one of your fans [for] over 15 years I watch Dog the Bounty Hunter and Dog and Beth on the Hunt every morning, that’s how I start my day I wish nothing but the best for you and your family.”

Despite Beth’s cancer fight, she has not wavered from doing her best work alongside her husband, Duane Chapman. The two recently apprehended Jinel Sexton while filming for their new series, a 39-year-old man who was charged with sexual battery on a minor child and was out of jail on a $200,000 bail.

Their newest show, Dog’s Most Wanted, is slated for release later this year. Even battling health issues, the Chapmans do it in the best way they know how! Being completely badass.

Be sure to SHARE this article if you love the Chapman family! Nothing can get this inspiring couple or their hairdos down.

Check out the news coverage on the Chapman’s new show coming later this year: