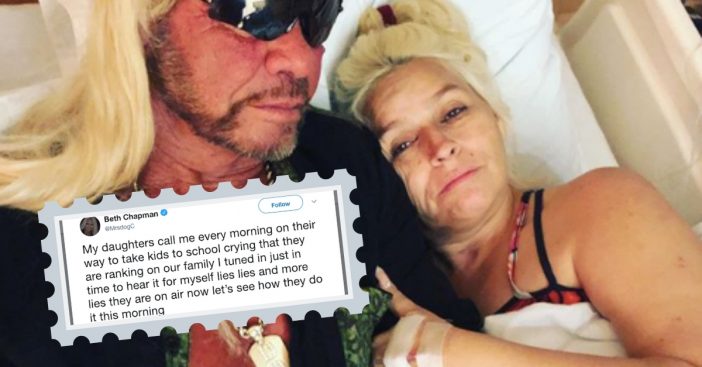 Beth Chapman, star of Dog the Bounty Hunter, has called for a boycott of a Hawaiian radio station that made some pretty questionable comments about her battle with lung cancer. Chapman took to Twitter to call out Power 104.3 for bullying and harassing her, her husband, and her family all while on the air.

She has asked her followers and fans to boycott the radio station and report it to the FCC. “How LOW do you have to be to talk bad about a woman fighting lung cancer?” Chapman’s post read. Chapman also stated that while on air, the hosts ‘made fun’ of her cancer and made jokes about it. Not just once, but multiple times.

How LOW do you have to be to talk bad about a woman fighting lung cancer.

Giving away Eminem tickets for your worst story about us ? Really 🤨

Wonder how their advertiser would like this 🧐 maybe we should put #Boycott1043 https://t.co/td1Kw7iEQz

“I think it’s so gross and without taste that @power1043 makes fun of us everyday they make jokes about my cancer they blocked me so I couldn’t see the hateful sh*t they are saying,” Chapman continues in a separate tweet, “It’s everyday,” she says, confirming that the radio station frequently makes comments on Chapman’s health and life in general.

She also confirmed in the tweet that the radio hosts actually blocked her on social media from seeing their accounts.

“When radio hosts go too far should they be held personally liable? Should they be able to bully a person to death?! I think the laws are pretty clear about invoking a person to anger or to depression,” she writes in a third tweet.

Many fans of Chapman came to the rescue and praised Chapman for calling out the radio hosts and agree that they should be held accountable for their actions.

Chapman had begun undergoing chemotherapy treatments for throat cancer in January. She was actually first diagnosed with stage 2 throat cancer in September of 2017 but was soon declared cancer-free. However, she began to not feel well shortly after and was rushed into emergency surgery at a Los Angeles hospital in November of 2018.

It was then that they discovered that not only had Chapman’s cancer returned, but it had spread to the lungs. Chapman shared the above photo to her Instagram account with the caption, “Another bend in the Road yet not the End of the Road.”

Dog The Bounty Hunter (whose real name is Duane Chapman), shared his insight amid the news of his wife’s cancer returning and metastasizing.

“I have to keep faith, I am the leader of the family. She thinks she is, but I am. I have to keep it where I don’t have any doubts and keep everything positive. I love my honey so much, I don’t know what I’m gonna do.”

Be sure to SHARE this article with good wishes for the Chapman family at this time!

Previous article: 7 Ways To Get Rid Of Pesky ‘Milk Spots’ Around Your Eyes
Next Post: 13 Things All Single People Should Buy From Costco