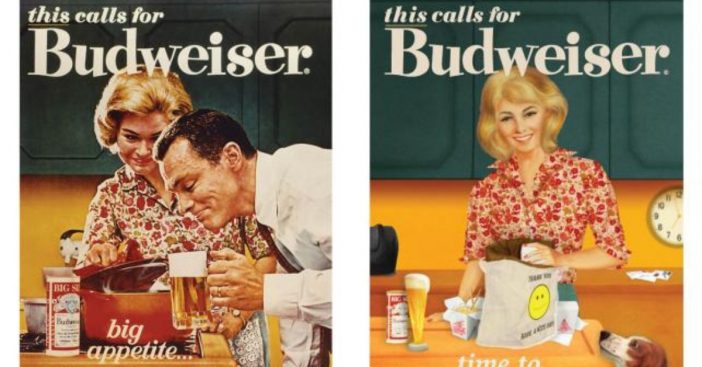 Vintage advertisements are part of what makes certain companies what they are today and they’re a lot of fun to look back on and remember. However, some controversy has stirred as Budweiser has modernized and reinvented some of their old “sexist” ads in the wake of International Women’s Day, which took place on March 8th this year.

According to AdAge, “Ads often used barely clothed women to pitch light beer or portrayed women as nothing more than servants to their beer-swilling husbands,” in terms of beer adverts.

AdAge also adds that “With a new campaign, Budweiser nods to that inglorious past to make a point about its future. The campaign, released today in conjunction with International Women’s Day, features full-page color ads in The New York Times, Chicago Tribune and Los Angeles Times that juxtapose sexist Bud print ads from the 1950s and 60s with updated versions portraying women in empowered roles.”

In the advertisements shown above, we see a woman standing over a hot pot of food cooking and her husband leaning over to smell what’s cooking while drinking a mug of Budweiser. The tagline reads, “Big appetite … dinner is almost ready and it sure smells good. Loosen your tie and enjoy your Budweiser.” The modernized version next to it shows a woman and no husband and the text “Time to unwind… It’s Friday, your favorite takeout just got here. Crack open a cold Bud and enjoy some time to yourself.”

What do you think about these advertisements so far? Let’s look at one more.

This final vintage advertisement shows a housewife pouring some beer for her husband, who seems to be in the middle of working and has an annoyed or frustrated look on his face (probably why the wife is pouring him a cold one, to be honest). The newer version of the advertisement shows a husband and wife relaxing with a box of pizza, sharing a can of Budweiser together.

Budweiser VP for marketing Monica Rustgi has shared a statement on the modernization of the vintage Budweiser advertisements that have allegedly been deemed ‘sexist’ and ‘controversial’. “For us, it’s all about using our past to really serve as a launch pad showing women in a more balanced fashion.”

What do you think about these vintage advertisements and their modernized versions? Do you think the older versions are controversial or sexist? Be sure to SHARE this article with your thoughts!

Check out the video below for things you didn’t know about Budweiser:

Previous article: A UK Family Is Offering $53,000/Year For Part-Time Nanny To Dress As A Disney Princess
Next Post: Oscar Mayer Is Hiring People To Drive Their Wienermobile Across The Country