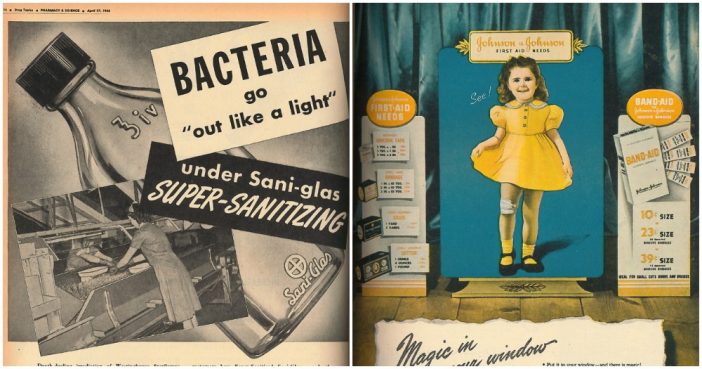 In 1944, the United States was in the thick of the Second World War. But even as the country battled overseas, it still had to function on the homefront.

Taken from the Drug Topics archives, these ads show an America adjusting to wartime shortages. But they also show how pharmacies were right at the center of commerce in the 1940s. From soda fountains to aspirin, pharmacies had it all. Some of the companies here no longer exist anymore, but others are still household names after all these years.

We hope you enjoy these old ads as much as we do! And if you decide to open up a soda fountain or start stocking Dr. Salsbury’s Par-o-san, send us a picture!

“What can you do when trained personnel is difficult to get … when customers want out-of-stock items … when equipment needs attention immediately.” This handy-dandy booklet tells you how to cope!

The war helped begin the slow death of the soda fountain, but ads like these show just how important they still were.

“Yes, farmers who raise poultry are asking for this safe, dependable disinfectant that ‘doesn’t stink.’”

You might think that any extra scents on top of the scent of chickens wouldn’t be that noticeable, but apparently, people had concerns. And this ad shows that pharmacies weren’t limited to human health concerns.

How many ads still use “cigarettes” and “freedom” in the same paragraph?

“We all know there’s nothing like real silk for floss.”