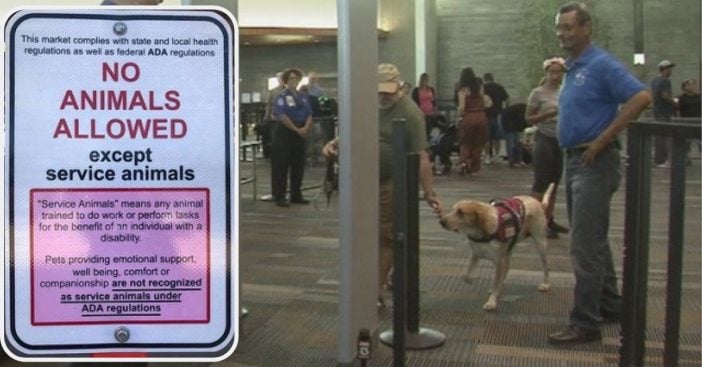 Service dogs and other types of service animals are a wonderful thing to have for those who struggle with real-life disabilities and need help from their trained furry companion. However, it’s become a very new and trendy thing to slap a vest and fake ID on your pet and call them a ‘service dog’ or ’emotional support animal’ to get them on the plane.

Many people do this so they don’t have to put their animal in the cargo bay area where many dogs have actually lost their lives or have come very close. By making their pet a ‘service animal’ their pet can sit up in the seat with them and everyone’s happy. But it turns out, not everyone is so thrilled with this idea.

Let’s also not forget that emotional support animals and service animals are NOT the same things. According to The Cheat Sheet, “Emotional support dogs don’t need any specific training, nor does the owner need to have a disability. More importantly, these types of dogs are not covered under the same ADA rules and regulations that service dogs are.”

This means if you’re passing your pet off as a service dog when they’re actually not, you put the entire service dog problem at risk. This means tighter rules and regulations, which is where a new law comes in.

Hawaii Senator Russell Ruderman proposed a new bill called bill 2461. The law states that anyone found passing off their pets as valid service animals when they’re actually not will be fined up to $500.

Here’s the catch when it comes to valid service animals. There’s no official registry for service animals, and technically, they aren’t even required to wear vests or an ID when with their owners at all! So, with this being a real-life issue, Senator Ruderman is aware of the difficulties that they might encounter having this law enforced, but he is still determined. “I’m very happy it passed. I understand some people may have concerns about it because it’s going to be difficult to enforce, but there are 20 other states that have it. Having a law is important,” he says.

While the disability community has shared an outpouring of support and agreement with the new law, it has had some pushback from other politicians such as state governor David Ige. Ige believes that there are issues with the fines in addition to how much authorities can ask disabled individuals under the rules and regulations of the ADA.

“None of the county police departments submitted testimony. However, it appears they would be the primary agencies responsible for enforcement. It may be difficult to prove in court by a clear and convincing standard that a person knowingly misrepresented an animal as a service animal. However, it is worth noting that similar legislation is present in at least 15 other states,” says Ige.

The Executive Director of Hawaii Fi-Do Service Dogs, Jim Kennedy, says that the new law, while presenting difficulties, is still major progress in the importance and validation of real service animals.

“The real work begins now that the bill becomes law. A lot of education needs to be carried out before its effective date of Jan. 1, 2019. We at Hawaii Fi-Do intend to help wherever we can. All of us need to join together to help educate our citizens about what a service dog is,” he says. Additionally, he adds that “Almost all dogs provide emotional support and calm us down. But that alone does not qualify a pet as a ‘service dog.’ It is important to understand and respect what the Americans with Disabilities Act (ADA) intended when it allowed legitimate service dogs to assist those with real disabilities.”

Be sure to SHARE this article with your thoughts on the new law!

Previous article: Lionel Richie Breaks Down In Tears After A Blind Singer’s ‘American Idol’ Audition
Next Post: Revival Of The Show ‘Mad About You’ Is Coming In 2019