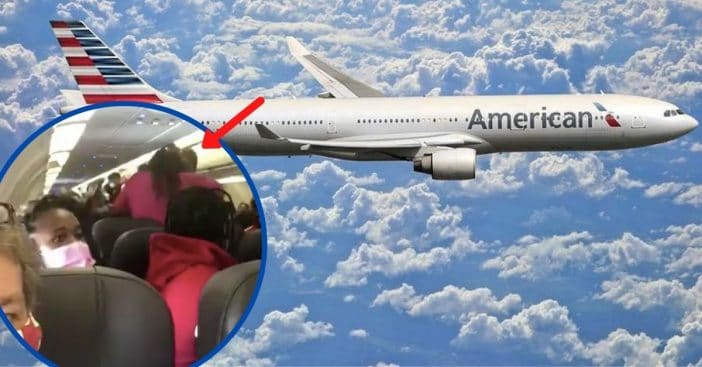 New footage has surfaced online of a brawl breaking out on an American Airlines flight over their face covering policy. The plane was waiting to depart when the fight broke out between passengers. According to Fox News, the incident began when one passenger refused to comply with the airline’s face mask policy.

Caryn Ross on Twitter uploaded the video online. She uses the caption, “Nothing like a morning Fight Club as tempers flared on American Airlines LAS-CLT flight today…. So much for social distancing.” Apparently, Ross’s husband was actually the one who recorded the incident.

Nothing like a morning Fight Club as tempers flared on @AmericanAir LAS-CLT flight today….So much for social distancing! #AAFightClub @thefatjack pic.twitter.com/NN9lj8enbf

A passenger on the flight from Las Vegas to Charlotte who refused to follow the face mask policy. This was after they boarded the plane. They were then asked to leave the plane and, of course, the passenger became upset. An altercation with other travelers eventually broke out. CTV News reports that the passenger was seen leaving the plane after authorities were called in.

A spokesperson for American Airlines has released a statement on the situation. “On Monday, a customer on American Airlines Flight 1665 with service from Las Vegas to Charlotte failed to comply with our mandatory face-covering policy after boarding the aircraft prior to departure. In accordance with our policy, the customer was subsequently asked to leave the aircraft and became disruptive, resulting in an altercation with other passengers.”

Airlines are denying future travel for people who don’t comply

The statement continues, “American, like other U.S. airlines, began requiring customers to wear a face-covering while onboard aircraft beginning May 11. We have since strengthened our policy to require face coverings be worn at airports and onboard, and announced in June that we may deny future travel for customers who refuse to wear a face-covering for the duration of this requirement.”

Many airlines have implemented a face mask policy for passengers boarding their flights. Some airlines have even banned travelers from being able to travel with the airline ever again if they do not comply.

Click for next Article
Previous article: Payless ShoeSource Is Back With A New Look And Name
Next Post: Carol Burnett Is Trying To Gain Legal Guardianship Of Her Grandson Amid Daughter’s Substance Abuse Issues