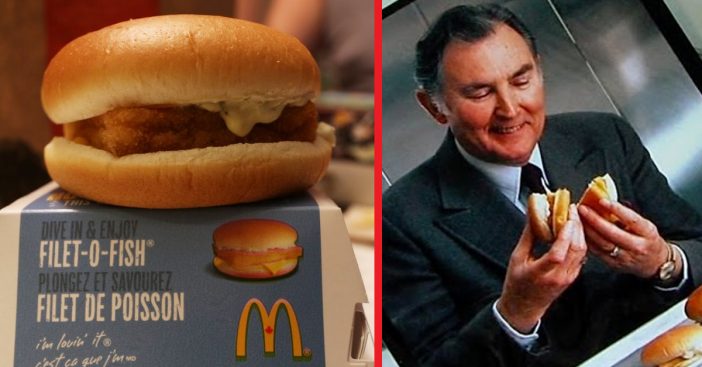 Lou Groen opened a McDonald’s franchise in 1959 that consisted of the most stunning menu of food (and mostly prices) that we’ve ever seen. This included hamburgers for 15 cents; cheeseburgers for 19 cents; fries, coffee, soda or milk for 10 cents each; and shakes for 20 cents. However, Fridays during the Lenten season greatly suffered from most of Groen’s city, Cincinnati, being 87% Catholic.

During Lent, eating meat on Fridays is prohibited as an act of abstinence and discipline, and even Groen practiced this Catholic tradition by not eating his own franchise’s burgers. That’s when he discovered a new idea that was derived from a fish sandwich at a restaurant down the street.

Frisch’s restaurant was apparently a place that sold a fish sandwich that everyone would go to on Fridays during Lent, which meant less business for McDonald’s. “My grandfather had the idea to start selling a fish sandwich,” Said Groen’s granddaughter, Erica Shadoin. “He did a lot of research and came up with a sandwich using halibut with a slice of cheese in it.”

That was the year that the fish sandwich became a permanent menu item for McDonald’s. The nationwide franchising of McDonald’s was put into effect by Ray Kroc just a few years earlier, and Groen’s franchise was the 69th McDonald’s location, the original being located in San Bernardino, California.

Ray Kroc apparently didn’t like the idea, saying that he didn’t want his restaurants to be “stunk up'” with the smell of fish, Groen was persistent, though, because he feared that he would lose business if he didn’t put this idea into effect. That’s when the two settled on a little friendly competition. Kroc would make up his own version of a meatless sandwich (a slice of pineapple and cheese on a bun) and Groen’s fish sandwich.

Whoever sold more of their sandwich on the same day would get their item placed on the menu.

And as we all know, the rest is truly history. What’s known as the Filet-O-Fish today had 350 orders to get it permanently placed on the McDonald’s menu, in comparison to Kroc’s idea, which only had a measly 6 orders.

Groen’s granddaughter says that the fish sandwich, which is now made with Alaskan Pollock instead of halibut, is her favorite menu item! Is it your favorite, too?

Be sure to SHARE this article if you love McDonald’s Filet-O-Fish sandwich!

Check out this hilarious Filet-O-Fish commercial below… you might start singing along!: