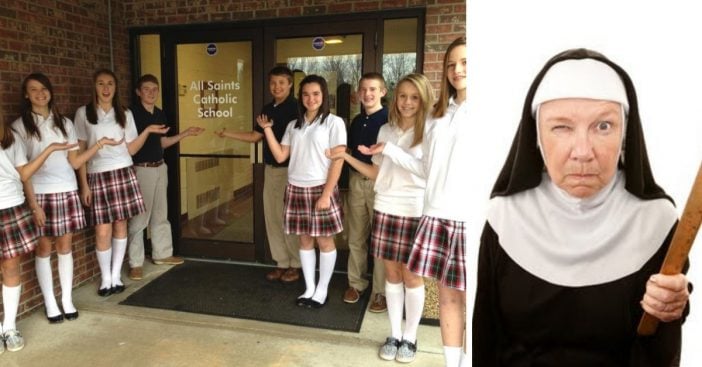 Here are some photos that will definitely give you a chuckle if you went to a Catholic School:

If you also enjoy watching The Office, you’ll love this Michael Scott quote. While Michael Scott got this kind of hilariously wrong, I bet you probably said something similar when you were a little kid just starting Catholic School.

Since Catholic Schools are religious and most Catholics believe you should save sex for marriage, sex education wasn’t exactly thorough if you went to a Catholic School. What do you remember learning in sex-ed? Did you have it at all?

3. The uniforms were strict

You may have been very jealous of your friends who went to public schools because they didn’t have to wear uniforms. What was the worst (or best) part of wearing a uniform? One of the worst things would have to be getting sent home for wearing something “wrong”. You wore the same thing to school for many, many years in a row so you may have been really confused when you had to choose your own outfits.

Confessions were just plain weird when you were a kid. Telling your sins to a Priest was downright scary. There is nothing more anxiety-inducing than having to tell a stranger what you did wrong in a small room.

5. You had a favorite Bible Verse

Sometimes it was a little more poetic than other times. Was your favorite time in school lunch or recess?

6. It was insanely strict

Public school kids had it easy. Catholic Schools could be very strict and had way more rules. Can you relate?

7. You still bring up Catholic School related topics to your friends

Sometimes people who didn’t go to Catholic School just don’t understand. You need to remind them every once in a while, just like this funny text conversation. Did you have a confirmation name?

8. You may have gone to a school that had all girls or boys

You might have gone to an all girls or all boys Catholic School, which made it even more exciting when you saw someone of the opposite sex or got to have a dance with the opposite sex. Or you got really shy because you didn’t know how to act around them.

Which things on this list did you relate to if you went to a Catholic School growing up? What would you add to this list?

Please SHARE this article with all of your friends who went to a Catholic School!

Previous article: Garth Brooks And Trisha Yearwood Share Their Secret To A Strong, Loving Marriage
Next Post: Hurricane Florence | Here’s What You Need To Know