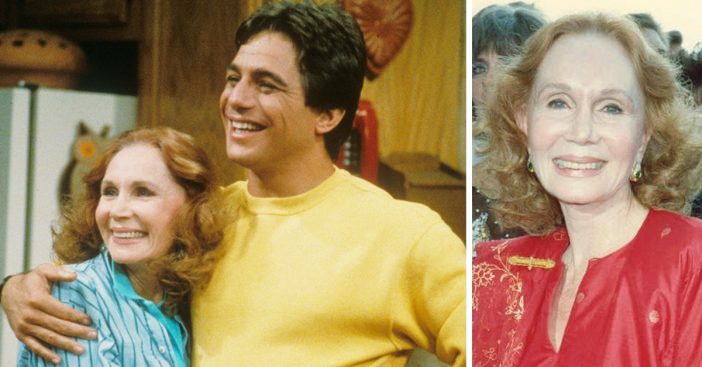 Katherine Helmond, best known for role as Mona Robinson on Who’s the Boss? and as Jessica Tate on the soap opera Soap has died at the age of 89.

Katherine passed away at her home in Los Angeles due to complications from Alzheimer’s disease. She died on February 23, 2019.

Katherine was born on July 5, 1929, in Galveston, Texas. She was raised in a Catholic household mainly by her mother and grandmother. She began acting in school plays as a child. Her stage debut was in the play As You Like It in New York in 1955. She later began working in television in the early ’60s but did not gain notoriety until the ’70s.

Her Most Famous Roles

She played Jessica Tate on the primetime soap called Soap. Her most recognizable role was as mother Mona Robinson in ABC’s Who’s the Boss?. She also had recurring roles on the show Coach and Everybody Loves Raymond. What do you think was Katherine’s best role?

She gained Emmy nominations for her roles on Soap, Who’s the Boss?, and Everybody Loves Raymond. She also earned a Tony award for her performance on Broadway in Eugene O’Neill’s The Great God Brown in 1973.

In addition to her work on television and Broadway, she starred in several films. She was in three films by Monty Python director Terry Gilliam including Time Bandits, Brazil, and Fear and Loathing in Las Vegas.

According to Variety, Katherine always loved acting, even when it became difficult. She said, “I felt I blossomed as a person when I got a chance to act. It’s been like an incredible marriage that really worked. I enjoyed every minute of it.”

Katherine Helmond has passed away.

My beautiful, kind, funny, gracious, compassionate, rock. You were an instrumental part of my life. You taught me to hold my head above the marsh! You taught me to do anything for a laugh! What an example you were!

Alyssa Milano, one of her co-stars on Who’s the Boss? took to social media to share her condolences. She wrote, “Katherine Helmond has passed away. My beautiful, kind, funny, gracious, compassionate, rock. You were an instrumental part of my life. You taught me to hold my head above the marsh! You taught me to do anything for a laugh! What an example you were! Rest In Peace, Katherine.”

Katherine is survived by her husband, David Christian. He released this statement after her death: “She was the love of my life. We spent 57 beautiful, wonderful, loving years together, which I will treasure forever. I’ve been with Katherine since I was 19 years old. The night she died, I saw that the moon was exactly half-full, just as I am now … half of what I’ve been my entire adult life.”

If you loved Katherine Helmond on Who’s the Boss? you can rewatch this hilarious clip of her strutting her stuff in a bikini top in the video below: