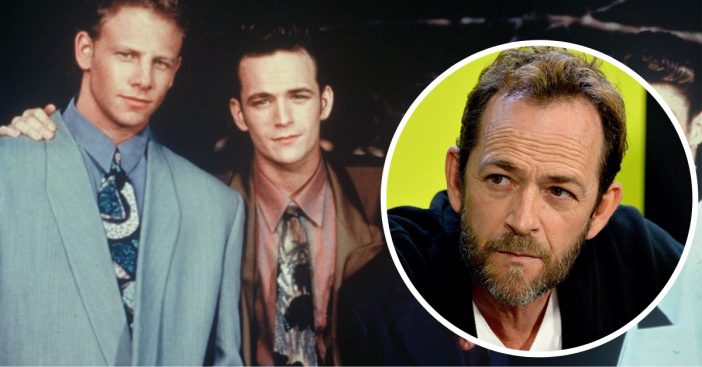 As of 12:07 PM PT on February 28th, it was reported that Luke has been sedated at the hospital.

Paramedics responded to Luke’s home around 9:40 yesterday morning. When they arrived, he was talking and responsive, however, his condition greatly deteriorated and he was then rushed to the hospital, according to TMZ. Coincidentally, Luke’s stroke came on the same day that it was reported there would be a revival of Beverly Hills, 90210.

Co-stars of 90210 and other friends of the actor have been sharing their support and well wishes for Luke following the heartbreaking news of his stroke.

Praying hard for Luke Perry today. May he have a full and fast recovery. 🙏🏼

Dean Cain, a co-star from the original 90210 series, wished a full recovery for his friend.

I just heard the frightening news about my dear old friend Luke Perry having a massive stroke. Luke honey I am praying so hard for you right now, I love you so much, and by God’s Grace you will get through this. Please pray for Luke 🙏🏼❤️ @LukePerryIII

A long-time friend of Luke’s, Kristy Swanson, reached out with extremely touching words to the actor.

90210 co-star, Ian Ziering, posted an old photo of the two on his Instagram account with the caption, “No words can express what my heart feels hearing today’s shocking news. Let us all say a prayer for his speedy recovery.”

Lou Diamond Phillips, another long-time friend of Luke, sent his thoughts and prayers his way upon hearing the news.

As of 12 PST (3 PM EST) on February 28th, TMZ reported on Perry’s condition, they said, “Sources connected to Luke tell TMZ doctors have placed him in a medically induced coma. The stroke, we’re told, was “massive.” When paramedics arrived at his home he was responsive and talking but his condition deteriorated and he was rushed to the hospital.” TMZ also reported that Luke Perry’s rep denied these claims (which were obtained by TMZ from a family member of Perry). Perry’s rep said he is just “sedated” at this time, though no official confirmation has been released from the hospital.

While there is a 90210 revival in the works with “most of the original cast,” there are still some cast members that likely won’t be returning, and we think Luke might be one of them due to his commitment to Riverdale.

Please SHARE this article with good wishes for Luke Perry at this time. We are praying for a speedy recovery!

You can watch Luke talk about transitioning from his time on Beverly Hills, 90210 and working on Riverdale now in the video below: