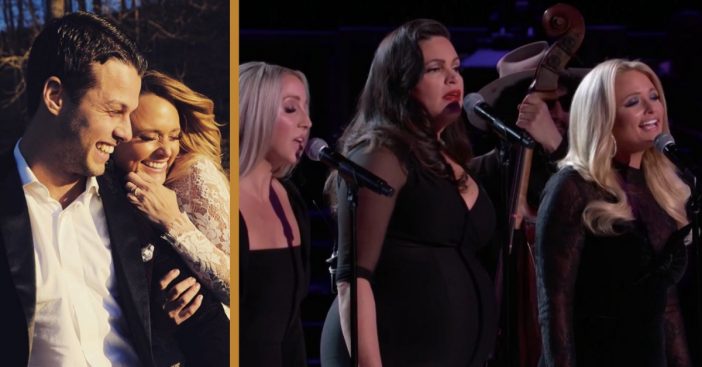 Miranda Lambert got secretly hitched over the weekend, but not before performing for NBC’s Elvis All-Star Tribute as part of Pistol Annies. It was filmed a few months before her secret wedding to now-husband Brendan McLoughlin. Lambert, Ashley Monroe, and Angaleena Presley sang a rendition of “Love Me” for the tribute special.

The tribute special was hosted by Lambert’s ex-husband, Blake Shelton. Many fans of the trio and the original song gave praise on Twitter towards the performance.

The Elvis special took place the very same weekend that Lambert dropped a bombshell on her fans via Instagram, that she had gotten married! There is still no exact time frame on when the two actually got married but a spokesperson for the country star confirms that it happened ‘a while ago’.

She shared two loving photos of herself on her wedding day with her new husband, along with the caption, “In honor of Valentine’s Day I wanted to share some news. I met the love of my life. And we got hitched! My heart is full. Thank you Brendan Mcloughlin for loving me for…. me.” The post ended with a little red heart and #theone.

The Elvis rendition was filmed just a few weeks before the trio’s release of their third album Interstate Gospel, their first album since 2013. Their next major performance is slated to be April 1st for Loretta Lynn’s birthday show at Nashville’s Bridgestone Arena.

The Elvis special ended with a rendition of “If I Can Dream,” in which Underwood, Post Malone, Mendes, Rucker, and Shelton all came together to sing along with the original Presley recording. The final performance was exceptionally powerful, emotional, and raw for all singers featured on the front line.

Director of the original ’68 Comeback Special, Steve Binder, was heavily involved with the production of this Elvis All-Star Tribute. He recently spoke about the impact that Elvis, and that particular show back in the 60s, has made on the world today. “These screenings mean a lot to me. Aside from all the Elvis fans worldwide – and there are millions of them – I think it’s good that the younger generation who have only been sort of brainwashed about how important Elvis was to the world really get a chance to see him.”

Be sure to SHARE this article if you remember the comeback special from the 60s!

Check out the performance of “If I Can Dream” below from the Elvis All-Star Tribute show:

Previous article: The Show ‘America’s Most Wanted’ Started With A Father Hoping To Solve His Son’s Murder
Next Post: ‘Gone With The Wind’ Has Released Rare Screen-Test Footage