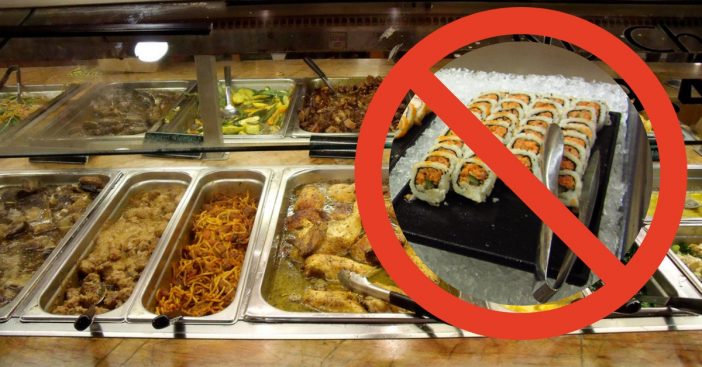 Buffet restaurants and all-you-can-eat buffets can be a great deal for a meal. However, they do come with some risks. For some people, all-you-can-eat buffets feel like a challenge and can lead to overeating, extreme fullness, and even illness. There is also an increased risk of foodborne illnesses from buffets where the food is not handled correctly.

It can be very difficult to tell if the food is being kept at the correct temperature. The danger zone for many foods is between 40 and 140 degrees because bacteria grows very quickly. To reduce your risk of getting sick from a buffet, here are the top foods and items in the buffet line you should avoid:

The sneeze guard is there for a reason. It is to keep germs from reaching the foods in the buffet line. Many times, the reason you get sick from a buffet is that someone touched, coughed on, or sneezed on a food that you ate. Yuck! Always wash your hands before and after going through the buffet line and don’t touch that sneeze guard.

Sprouts are the cause of many illnesses because it is hard to get them cleaned properly. They grow in damp environments and often breed bacteria. Just skip them at restaurants altogether.

Stick to sushi from high-quality restaurants. Good sushi that won’t make you ill requires the best quality seafood and lots of knowledge about sushi preparation. The sushi also needs to be kept at a precise temperature.

Tuna is another fishy option that is hard to keep at the correct temperature. It has to be colder than other types of fish and buffets may not be able to do this. Tuna is more susceptible to bacteria than other fish, so just go ahead and avoid tuna at buffets.

Read on to the NEXT page for more foods to avoid at buffets!