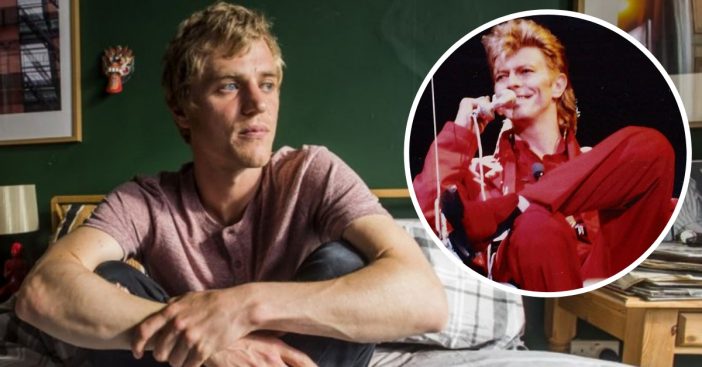 It has recently been reported that Johnny Flynn has been cast as David Bowie in British director Gabriel Range’s music biopic Stardust. The film joins a slew of other music biopics from Elton John’s biopic to the highest-grossing music biopic of all-time, Bohemian Rhapsody, which has already been nominated for and won tons of awards.

The setting of the film is slated to be centered around 1971 and it follows Bowie’s first trip to America when he was inspired to create his Ziggy Stardust character. Marc Maron is also slated to play Bowie’s publicist and Jena Malone has been cast as Bowie’s first wife, Angie.

In addition to the initial casting of the film’s late music legend, Paul Van Carter and Nick Taussig will also be producing alongside Range and Christopher Bell will be forming the script for the movie. Additional casting still has yet to be confirmed.

For those who are excited to hear some of Bowie’s music in the biopic, we hate to crush your dreams but it doesn’t look like we’ll be hearing much of it. According to Consequence of Sound, Duncan Jones, who is the son of David Bowie, has confirmed that the movie did not receive the blessing from the family and likely will not receive the rights to his music.

Flynn is a British musician and actor, who is best known for his role on the Netflix original series Lovesick and NatGeo series Genius. He is also currently in the Amazon series Vanity Fair and is currently working on the upcoming Jane Austen adaptation, Emma. In addition to being heavily involved in the TV and film industry, he has also had his fair share of experience on the stage.

The young actor appeared in both in London and New York in the show Hangmen. He is also currently starring on the West End adaptation of the show, True West. He clearly keeps himself busy!

David Bowie isn’t the only musical superstar that is getting a biopic out of Berlin this year. According to Billboard, a $23 million musical film about Celine Dion is also in the works, slated to come out of French studio Gaumont.

There is not much other information about the biopic, despite a May 2020 release date and an estimated $5,500,000 box office budget, according to the film’s official IMDb.

Be sure to SHARE this article if you’re excited about the newest David Bowie biopic!

Check out the video compilation below of Bowie playing “Ziggy Stardust” in 1972:

Previous article: Breaking: ‘Young And The Restless’ Star, Kristoff St. John, Dies At Age 52
Next Post: UNO Has Confirmed That You Can End The Game With An Action Card