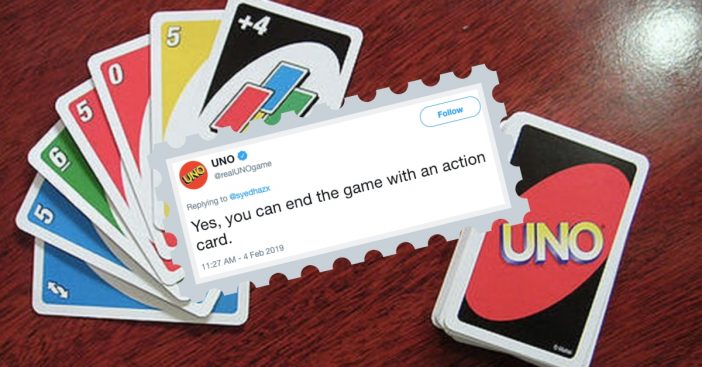 It looks like UNO has officially confirmed via their Twitter account that you can actually end the game with an Action Card, but with a twist. “You can end the game on an action card, however, you can only play one card per turn,” the official UNO account explains, “You cannot stack cards. If your opponent played a Draw 2 card, then you would need to draw 2 cards and skip your turn.”

One Twitter user even asked if you can win the game with “change color/+2/+4.” They responded with, “Yes! If a Draw Two or Wild Draw 4 is the last card played, then the next player will still need to pick up those cards to be added to the final counts.” Did anyone ever know this before?!

According to Unilad, it’s not simply just a situation of not reading the rules fully before playing the game and ending up playing it completely wrong. There’s no actual rule that says you can’t use an Action Card to end the game. Even more so, UNO obviously confirmed it themselves, so we really have been playing it all wrong.

Check out some official statements from UNO, accompanied by user responses, below:

Hi Samitha! You can end on an action card, however, you can only play one card per turn.

The original statement that we quoted above. Since this initial question, their Twitter account has been flooded with questions on the rules and what is acceptable.

If you read through the rules, you'll find this: If the last card played in a round is a Draw Two or Wild Draw Four card, the next player must draw the 2 or 4 cards respectively. These cards are counted when the points are totaled. Letting you know you can end on an action card!

Okay, so UNO has even stated that the rules include this neat little trick that most people seem to pass over. More of a reason to actually read the rules before we play! Or, we can just make up our own rules as we go. That’s acceptable, right?

Yes! If a Draw Two or Wild Draw 4 is the last card played, then the next player will still need to pick up those cards to be added to the final counts.

Our heads are starting to spin a bit with all these rules. Anyone else?

For those whose heads are spinning as much as ours, Mashable has kindly explained it in layman’s terms so we can all understand a bit more how this technique works.

“For instance, the wild cards and draw cards, when played, would force your opponent to pick cards based on the numbers displayed (and sometimes colours). However, these can be thwarted through the skip and reverse cards. These five cards are what makes the UNO game thrilling so it’s no surprise that over the years there has been an ongoing debate among players if the game can be won through Action cards.”

Be sure to SHARE this wild news with your friends! And get to playing a fresh round of UNO.

Previous article: Johnny Flynn Tapped To Play David Bowie In New ‘Stardust’ Biopic
Next Post: It Is Actually Possible To Get Your Costco Membership Taken Away