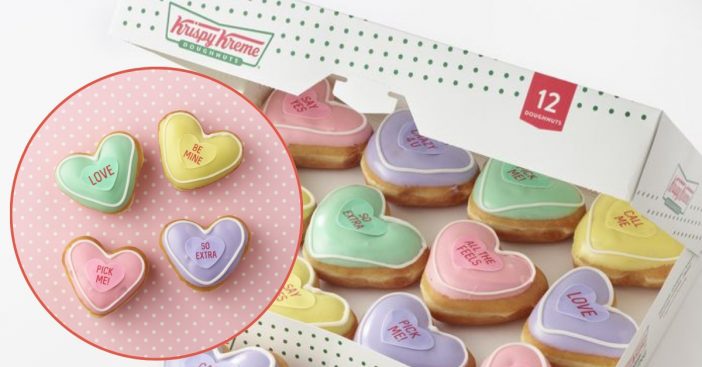 We recently reported that NECCO’s SweetHeart Conversation Hearts would not be available this coming Valentine’s Day, due to not having enough time to produce them. But that’s okay because Krispy Kreme is selling Conversation Heart Doughnuts with the same adorable messages on them… so adorable, we could just eat them right up!

The doughnuts are obviously the classic Krispy Kreme, shaped like a heart, topped with colored frosting and a sweet message written on top like “Be Mine,” or “Crazy 4 U.” Unfortunately, they’re only available for a limited time, so get them while you can!

Now, of course, Krispy Kreme only implements the finest ingredients for its Valentine’s Day treats. This consists of Cake Batter, Strawberries and Kreme, Raspberry, and Chocolate Kreme and now all of a sudden we have a serious sweet tooth over here!

Dave Skena, Krispy Kreme’s chief marketing officer, released a humorous statement on the reveal of these new Conversation Heart Doughnuts. “Finding the right word can be like, I don’t know….hard. But eating a doughnut is easy. So, we printed the right words on the doughnuts for you so you can’t mess this up,” he says.

The messages on the doughnuts come with the traditional sayings we all know and love, including some new ‘millennial’ sayings like “So Extra”, “All The Feels,” and more, obviously trying to appeal to the younger generation of lovebirds as well.

According to reports, it took NECCO 11 full months to complete a full distribution of these candies, meaning there would be an enormous shortage of candies for Valentine’s Day.

Be sure to SHARE this article to spread the news about Krispy Kreme’s new Conversation Heart Doughnuts!

Check out the official news coverage on this story below: