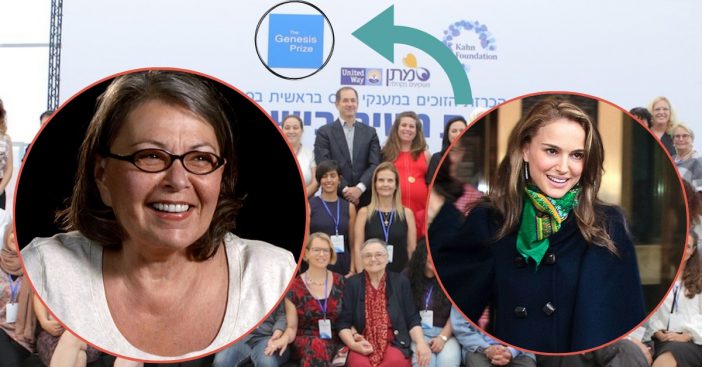 Roseanne Barr is at it again! She recently called out Natalie Portman for refusing to attend an award ceremony in her honor, calling Portman “repulsive.” According to Fox News, Portman did not want to attend the award ceremony because she didn’t want to “appear to endorse” the Israeli prime minister.

The incident happened just last year, where the actress declined to accept the Genesis Prize because she “did not want to appear as endorsing” Benjamin Netanyahu, who was also present at the event. Barr had a few words for Portman as a result.

“I am not part of the BDS movement and do not endorse it,” Portman said, referring to the global movement of boycott and sanctions against Israel. “Like many Israelis and Jews around the world, I can be critical of the leadership in Israel without wanting to boycott the entire nation. I treasure my Israeli friends and family, Israeli food, books, art, cinema, and dance.”

The award is commonly referred to as the Jewish Nobel Prize and is typically given to an individual in recognition of their personal philanthropy against anti-Semitism.

Next came what Barr thought of Portman’s decision. She said, “It was really sickening, I find her repulsive… She was raised in incredible privilege of safety in the Jewish state and knows nothing about anti-Semitism.”

Barr continued to call Portman a “darling of the left” who “grew up in safety and privilege.” Barr wasn’t the only one who wasn’t happy with Portman’s decision. Some Israeli politicians expressed some backlash towards the decision due to apparent decreasing support of Israel among young American Jews. This, in turn, caused them to become distressed by the decision and question the actress’s actions.

Fox News reports that this decision from Portman was distressing and troubling for the Genesis Prize Foundation as well, due to the fact that they aim for their ceremonies and its philanthropy to not be politicized. According to the Middle East Monitor, since the award was essentially in her honor, it had to be canceled as a result of her no-show.

“[The] mistreatment of those suffering from today’s atrocities is simply not in line with my Jewish values. Because I care about Israel, I must stand up against violence, corruption, inequality, and abuse of power,” the actress said in her own defense.

Be sure to SHARE this article with your thoughts!

Previous article: Olivia Newton-John Denies Reports Of Failing Health, Here’s What She Has To Say
Next Post: Celebrate Valentine’s Day On A Budget With This Awesome $12 Fondue Set