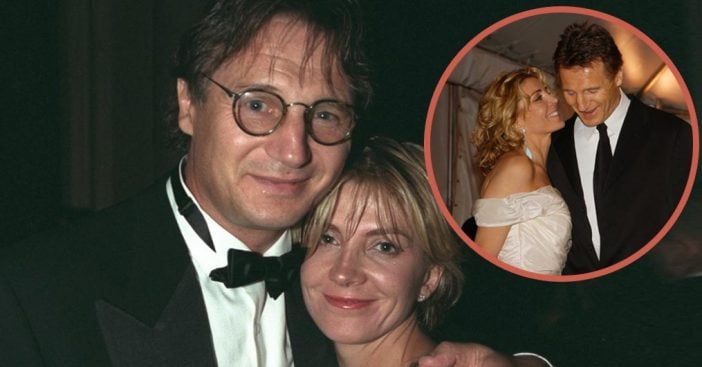 There is certainly no other love story out there like the bond that Natasha Richardson and Liam Neeson shared together. Both of them played roles in films that mirrored a “fairytale relationship” like the one that they had, that is until tragedy struck their 16-year marriage short. Richardson had taken a fall during a skiing accident in Quebec in 2009 and succumbed to her injuries.

In all the years leading up to her unfortunate and untimely death, the two truly had a beautiful life together. Neeson even states that Richardson’s motherly nature created the perfect childhood for their sons, Micheál and Daniel. Hearing what they have to say about each other is truly remarkable.

Liam Neeson on his marriage to Natasha Richardson

The two had actually been starring opposite each other in the Broadway show Anna Christie in 1993. That’s when Neeson had acknowledged that he had serious chemistry with Richardson.

“I’d never had that kind of an explosive chemistry situation with an actor, or actress… We had just this wonderful kind of dance—free dance on stage every night. She and I were like [Fred] Astaire and [Ginger] Rogers,” Neeson said on 60 Minutes.

At the time they met, Richardson was married to producer Robert Fox, but that did not stop the two from forming a strong bond with each other. When Richardson was still alive, she has spoken about how ironic it was that she had met Neeson just as her current marriage was beginning to fail.

“Working with him, what happened between us, and that becoming public knowledge in conjunction with my marriage falling apart, was kind of bad timing. So what can I say? Obviously I fell very much in love with him,” she says.

Neeson states that he knew he was in love with Richardson based on her reaction to his 30th birthday card addressed to her. He had sent her a card from the set of Schindler’s List, and it read, “You’re catching up with me. Lots of love, Oskar,” which was in reference to Neeson’s role in the film.

Richardson did not find it romantic at all and confronted him, asking what exactly their relationship was. That was when he knew he loved her and they wed in the summer of 1994.

Though the two were very much in love, Richardson couldn’t help her hard time adjusting to being separated during filming. “It was difficult to kind of go, ‘Bye, honey! Have fun with the other girls!'” she said.

Less than a year after being married, they became parents to their first son, Micheál in 1995, and Daniel 18 months later. They truly had a beautiful life together leading up to Richardson’s passing. When Neeson looks back on his favorite things about his late wife, he says, “She cared for everybody. She has a motherly instinct. And she’d make dinners for everyone and just looked after us all.”

Please SHARE this article in remembrance of this beautiful life and marriage that Natasha Richardson and Liam Neeson shared together.

Check out the video below of what Neeson’s ‘sweetest memory’ of Richardson is: