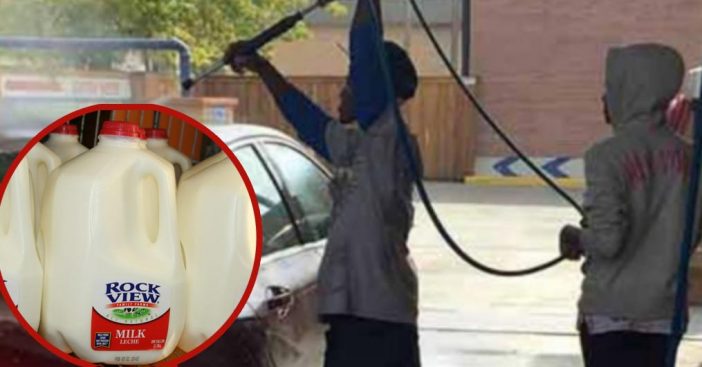 There are so many people out there who need help. Sometimes it just takes one simple act of kindness to make the world a better place. Often, you see people on the street and just go on with your day. You might get approached by someone and be afraid to help them.

According to a story on Facebook, a woman was approached by a young man at a gas station. He asked if she would buy him a gallon of milk. She could see his girlfriend was holding a box of cereal. The woman said her first instinct was to say no, but she decided to get the milk after all.

Find Out What She Did Next

After she gave the young man the gallon of milk and he thanked her, she had a thought. She told him her next stop was going to be the car wash, but he if he wanted to wash her car for her, she would give him $20. She could see that this young couple could use any money or help they could get.

She said that he had tears in his eyes after she paid him. According to the Facebook post, “He told me that more than anything he appreciated me giving him the opportunity to be a man again in the eyes of his girlfriend and work for the money. The whole time his girlfriend helped him. It’s like she was proud of him. You could tell the love was so real. Real beyond material things and what he could do for her.”

She Didn’t Stop There

What a sweet story! Instead of simply giving him $20, which would have been nice, she gave him the opportunity to work a little and make his girlfriend proud of him. This was probably worth more to both of them than the $20.

After the woman saw how much she helped them, she took them to her apartment complex and gave them clothes for interviews. They had been telling her about all of the interviews they are going on and how they are trying to get help. She also said she would drive them to their interviews if needed.

Hopefully, this will help you remember how much small acts of kindness can mean to someone else. Even if you don’t have much, you can still make someone’s day. Someone always has it worse than you do and you can inspire others to be kind and helpful.

If you enjoyed this article, please SHARE with your friends and family to inspire them to be kind today and help others!