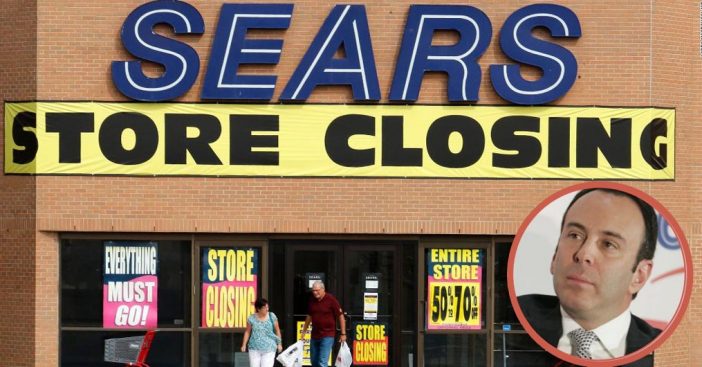 The 125-year-old store will likely be looking into a liquidation sometime in the near future if no bids come forward for the $4.6 billion proposal by its chairman, Eddie Lampert. The proposal was offered as a means of buying the company out of bankruptcy through Lampert’s hedge fund, ESL Investments.

ESL, as of right now, is the only party that would be willing to buy Sears as a whole, but with no other lenders coming forward as of this moment, the future doesn’t look very bright for the company. Should Lampert miss his deadline of December 28th at 4 pm, Sears could be closing its doors for good. Should Lampert actually secure his deadline, advisors would have until January 4th to decide if he is qualified.

Sears officially filed for bankruptcy on October 15th with just under 700 stores. Since the initial filing a slow-paced liquidation has been in the works and now Sears may be knocking on death’s door, should the outcome not be in Lampert’s favor.

Lampert’s original plan to save Sears back in the day was by combining the company with Kmart, which ESL bought out of bankruptcy in 2002. Despite this plan, cross-selling Sears and Kmart items just was proving to be successful in sales.

Lampert’s vision was to keep Sears alive and turn it around advertising and less investment into his actual stores. Millions of dollars were poured into Sears via ESL Investments, but the company finally hit a wall when they could not meet a $134 million payment, which really showcased the massive amounts of debt the company had been in.

Since the Sears company has not made a substantial rise in profit since 2010, lenders are calling Lampert’s efforts to keep Sears alive as a “foolhardy gamble with other people’s money,” according to CNBC.

In addition to the lack of proper financing under Lampert’s belt, he has also asked that creditors agree to a release from potential lawsuits over past transactions (including Sears’ spinoff of Land’s End and transactions with Seritage Growth Properties). Despite his plea, avoiding any legal action does not seem to be in Lampert’s favor at the moment.

“The question is if there is anyone but Lampert or the employees who view Sears coming out of bankruptcy — rather than liquidation — as the better outcome,” says Philip Emma, senior analyst with Debtwire and an expert in retail bankruptcies. Only time will tell.

Be sure to SHARE this article if you’ll miss shopping at Sears!

Previous article: Adam Lambert’s Emotional Rendition Of ‘Believe’ Brought Cher To Tears
Next Post: Poor Man Asks Woman To Buy Him Milk, Then She Reached Into Her Wallet To Give Him More