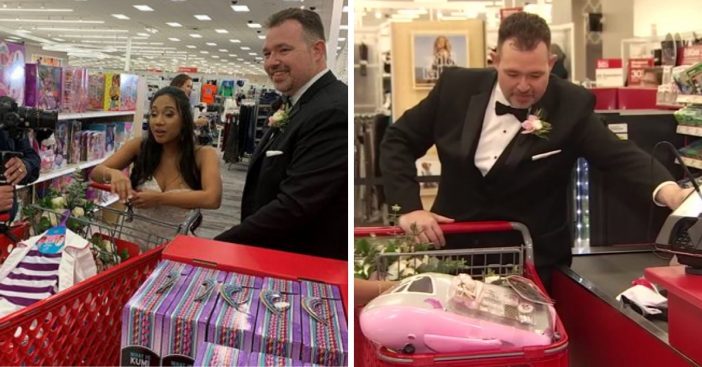 An Orlando couple took their wedding day to Target, giving each of their guests a $10 Target gift card to purchase gifts for the U.S. Marine-run program called Toys for Tots. Brad and Jessica Bond originally began dating 7 years ago and have made it an annual tradition to give back to Toys for Tots specifically.

According to the official Toys for Tots website, their mission is, “to collect new unwrapped toys and distribute those toys to less fortunate children at Christmas”. Many of the participating Target shoppers who attended the Bond family’s wedding were inspired to spend much more than just the $10 gift card for this occasion.

Brad Bond, the groom, spoke to WESH 2 about his relationship with his wife, how their first date was actually a Target Toys for Tot run, and how grateful he is to be able to give back.

“So if we can make some kids smile on Christmas, didn’t matter if it was one day, or a relationship, it was successful,” he says, “I have the most amazing wife on the planet, so if we’re able to give back a little bit and share our blessing with others, then what better can we do on our wedding day?”

Toys for Tots was founded in 1947 by Marine Corps Reserve Major Bill Hendricks. As the official website states, it was actually Hendricks’ wife who was the real inspiration behind the charity. She had apparently hand-crafted some dolls and asked her husband to deliver them to an agency that donates them to children in need.

When Hendricks informed his wife that there was no such organization, she simply responded, “start one”. His reserve unit in LA collected and distributed 5,000 toys in the founding year.

According to the website, 548 million toys have been distributed to date and 251 million children have been supported to date.

How do you donate?

For those who are interested in donating, there are multiple ways to donate. You can make a monetary donation online (you can also donate in memory of or in honor of someone), you can donate toys, donate by mail, crowdfunding, or even donate your vehicle! The organization has grown so much over the decades that it has expanded to other means of helping the less fortunate.

You may also find a local campaign in your area to get involved with your state’s Toys for Tots program and help raise awareness for children who are in need.

Please SHARE this article to spread the news about this incredible story of giving.

Check out the full news coverage on the story below:

Previous article: The Original Jane Banks Makes A Cameo In ‘Mary Poppins Returns’ And Gives Nods To Original Film
Next Post: Shake Things Up This Holiday Season With A Black Christmas Tree