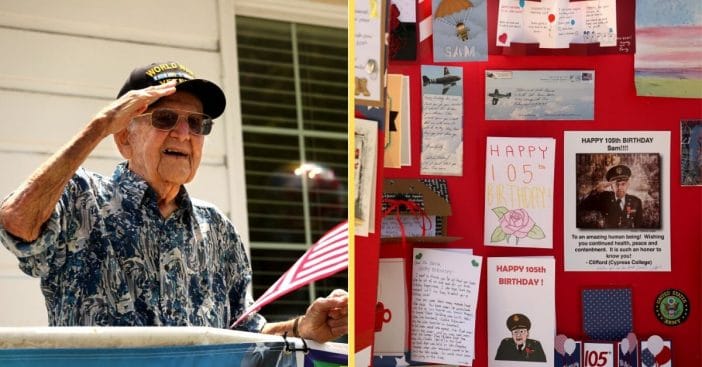 Lt. Col. Sam Sachs recently got a special birthday honor after his party was canceled due to the ongoing coronavirus. He celebrated his 105th birthday this past weekend and even got a special letter from President Donald Trump. In addition, he also got a parade of well-wishers in cars, military vehicles, and an appearance from a Los Angeles County sheriff’s helicopter.

“It’s a marvelous feeling, yes, really,” Sachs says as he watched the parade pass by his residential living neighborhood. “The emotions are running so high … It just doesn’t get any better than this. It’s just unbelievable. This is a dream.”

In a video posted to YouTube titled “Sam Sachs 105 BDAY Wish,” Sachs wondered how many birthday cards he could get after his party was canceled. Well, since then, he has earned about 6,200 cards from across the U.S. and counting. The hour-long parade along his residential neighborhood consisted of both classic and modern cars and motorcycles. The parade also included a dozen Los Angeles County sheriff’s vehicles and a county fire truck with their sirens going off.

Some of these vehicles were decorated in American flags and also had balloons and signs to honor the WWII vet. The vehicle’s occupants were waving to him and thanking him for his service. “I just can’t believe it. I can’t believe all this is happening. Gee whiz!” he says, speaking into the microphone in his yard. “Thank you, folks. Thank you for making my day. I had no idea what to expect … This is magical.”

He has a lot of history with WWII

Sachs served in the 325th Glider Infantry Regiment of the 82nd Airborne Division. He also took part in the Normandy invasion and ended up being part of a unit that helped liberate a concentration camp in Germany. Ivonne Meader, who owns the assisted living home, says that Sachs is overwhelmed with positive emotion after all of this.

“He’s being overwhelmed in a good way right now,” she says. “Every day is more. Every day [it] just multiplies more.”