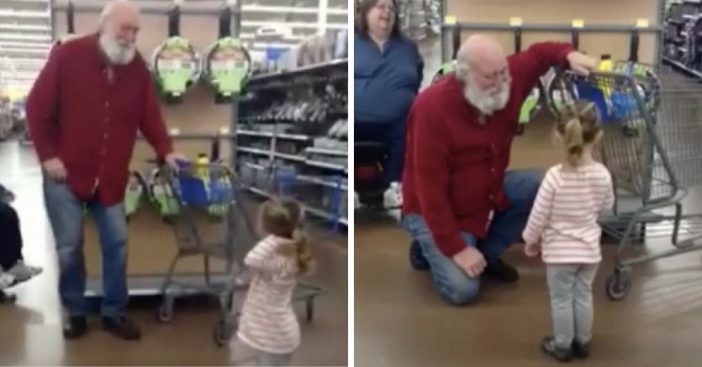 Every child’s dream is to meet Santa. Whether it’s catching a lookalike Santa Claus driving on the highway or staying up all night (and inevitably failing) to see Santa Claus come down their chimney on Christmas Eve, children will light up instantly at the magic of Christmas and, in particular, Santa Claus.

For one little girl in a Walmart in Hurricane, West Virginia, her dreams came true. Sophie Jo Riley, 3, noticed a tall man with a white beard wearing a red sweater and believed it to be the man himself. According to her older sister, Sophie was sneaking around to follow “Santa” and she’d turn around and tell her family, “Shh! It’s Santa!'”

Sophie’s dad provided some encouragement for Sophie to go up to the man and speak to him. She timidly walks up to him and asks, “Santa?” It turns out that the man’s name is actually Roger Larck. Larck took matters into his own hands and decided to play Santa for a little bit in hopes to provide some wonderful Christmas memories for Sophie.

He knelt down on one knee to meet her level and began speaking to her. She was showing off her pretty nails to him and also says that he can expect cookies when he arrives at her house. He asks if all the cookies are for him, but she replies that he can only have one! She says the others are for the reindeer.

Sophie’s older sister recorded the meeting between the two and posted it on Facebook. Since posting the video, it has received over 1 million views and nearly 15,000 shares. According to Sophie’s mother, Erika Riley, the moment really instilled in them what the true meaning of Christmas is about.

“If there really was a Santa Claus, and now I question it… I think maybe there really is. That’s exactly how I picture him to be.”

Larck did speak to some news networks about the encounter and was absolutely delighted to be a part of making a little girl’s dreams come true.

“I’m tickled I’ve been a part of something that other people have enjoyed,” Larck tells WSAZ, “It was just me having a conversation with a little girl. It melted my heart when it happened.”

Be sure to SHARE this article if you loved this heartwarming Christmas story! Does it help you remember the magic of Christmas?

Check out the full video of the encounter below: