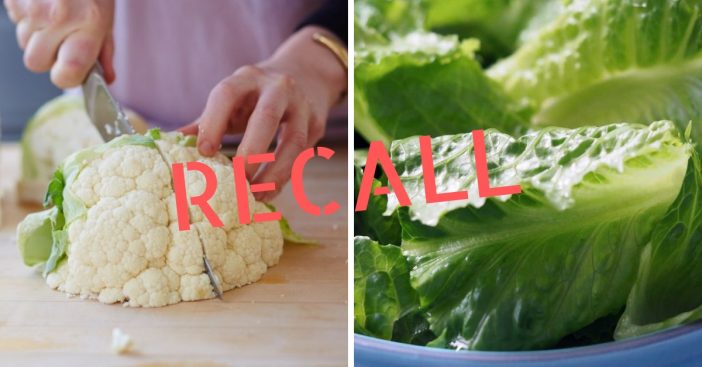 Adam Bros. Farming Inc. in Santa Maria, CA has officially recalled cauliflower and other types of lettuce in light of the recent romaine lettuce recall. According to the California farm, any cauliflower that was harvested between November 27th to November 30th may be contaminated with E. coli.

The farm released a statement on the recall, saying, “Out of an abundance of caution, Adam Bros. Farming, Inc. is initiating this voluntary recall in cooperation with the FDA.” There have been no reported illnesses or recalled products that have tested positive for E. coli, thankfully. “The recall was initiated after it was discovered that sediment from a reservoir near where the produce was grown tested positive for E. coli,” the farm confirmed.

The California farm has been directly affected by the previous romaine lettuce recall and health officials urge other farms to be wary of these recalls. Consumers should always check the label before purchasing any of the potentially contaminated food items.

Although the produce was harvested in late November, Adam Bros. Farming Inc. asks consumers that the product not be ‘eaten, sold, or transferred’. The recall was officially announced on December 13th.

“The recall was initiated after it was discovered that sediment from a reservoir near where the produce was grown tested positive for E. coli O157:H7. Filtered and treated water from the reservoir may have come in contact with the produce after it was harvested. None of the filtered, treated water has tested positive for E. coli, all E. coli tests returning negative. This bacteria may cause a diarrheal illness from which most healthy adults can recover completely within a week. Some people can develop a form of kidney failure called Hemolytic Uremic Syndrome (HUS). HUS is most likely to occur in young children and the elderly. The condition can lead to serious kidney damage and even death.”

The full recall report, including the recalled items and their label numbers, can be found on the farm’s website.

Please SHARE this article to spread the news about this mass produce recall.

Check out the news coverage on this recall below.

Previous article: Joanna Gaines Shares One Of Her Family’s Favorite Christmas Traditions
Next Post: Del Monte Canned Corn Is Recalled Due To Risk Of Life-Threatening Illness