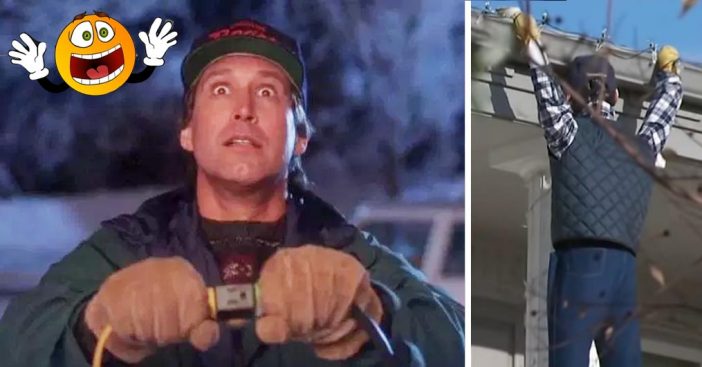 A very realistic Christmas display based on the movie National Lampoon’s Christmas Vacation was so good, a man called 911 because of it. Alfred Norwood Jr. was driving home and he saw a man dangling from a roof on a two-story house. He panicked and went to access the situation.

Alfred jumped out of his truck and didn’t even close the door. He ran over and tried to move the ladder so the man could reach it. Alfred is an Air Force veteran, so helping others is nothing new to him. The man didn’t reply and Alfred said his heart was racing with so much adrenaline. He tried to flag down passing cars but no one stopped, so he called 911 in a panic.

While Alfred was waiting for emergency assistance, he decided to take a closer look and try to talk to the man. He soon realized that it wasn’t a man, but a very realistic dummy. The dummy was dressed up to be Clark Griswold, from the 1989 movie National Lampoon’s Christmas Vacation.

Chris and Hannah Heerlein own the house and have spent weeks decorating the outside of their home in hopes to win a neighborhood Christmas decoration contest. They wanted to recreate the famous scene from that movie, where Clark Griswold falls while trying to put up Christmas lights.

Chris bought a dummy and got clothes that looked exactly like the outfit Clark wears in the scene. Hannah said she worried it was too realistic, and it turns out she was right. When the police arrived on the scene, Alfred explained what happened and they could see why he was fooled. It looks that realistic.

The whole time, Hannah was inside with her kids. The police told her that if the decorations caused any more confusion, they would have to remove them. She said she was mortified, but then she saw the security footage of Alfred trying to save the dummy. Everyone got a good laugh out of it.

What The Family Did Next

Turns out Alfred has never even seen National Lampoon’s Christmas Vacation, although we bet he will now. The Heerleins reached out to Alfred and gave him a gift card for being so kind and the families have even hung out since this crazy incident.

The Heerleins decided to put up a sign that explains that the man hanging from the roof is a dummy, to ensure that nothing like that happens again. Apparently, the same thing almost happened again because someone didn’t read the sign! But, the Heerleins saw the man jumping out of his truck and ensured him that it was only a dummy.

We hope the Heerleins win the decorating contest! They deserve it! What do you think about their decorations and this story? If you enjoyed this, please SHARE with your friends who will get a kick out of this!