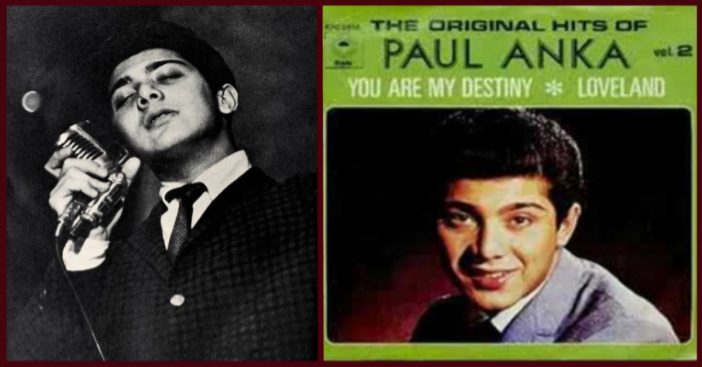 Paul Anka recorded his first single, “I Confess”, when he was 14. In 1957 he went to New York City where he auditioned for Don Costa at ABC, singing what was widely believed to be a lovestruck verse he had written to a former babysitter. In an interview with NPR’s Terry Gross in 2005, he stated that it was to a girl at his church whom he hardly knew.

The song “Diana” brought Anka stardom as it rocketed to #1 on the Canadian and U.S. music charts. “Diana” is one of the best selling singles ever by a Canadian recording artist. He followed up with four songs that made it into the Top 20 in 1958, including “It’s Time to Cry”, which hit #4 and “(All Of a Sudden) My Heart Sings”, which reached #15, making him (at 17) one of the biggest teen idols of the time. He toured Britain, then Australia with Buddy Holly.

Anka also wrote “It Doesn’t Matter Anymore” – a song written for Holly, which Holly recorded just before he died in 1959. Anka stated shortly afterward: “‘It Doesn’t Matter Anymore’ has a tragic irony about it now, but at least it will help look after Buddy Holly’s family. I’m giving my composer’s royalty to his widow – it’s the least I can do.”

Lyrics to Paul Anka’s “You Are My Destiny”

Click for next Article
Previous article: Right From the Start, We Gave Elton John and Kiki Dee Our Hearts
Next Post: DYR Today, August 18