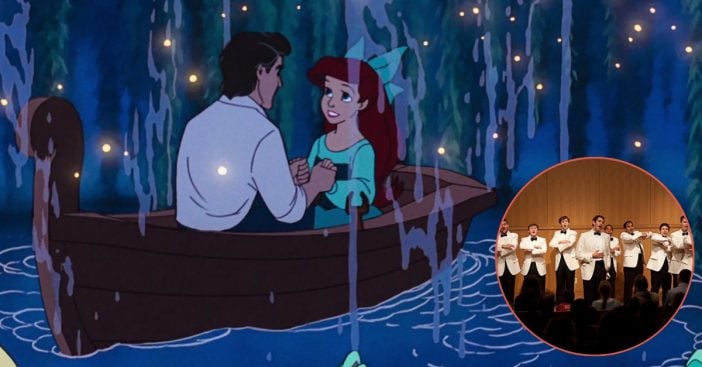 It appears that the iconic and beloved song “Kiss The Girl” from Disney’s The Little Mermaid has now been deemed misogynistic amid the #MeToo movement. The song has reportedly been dropped by an all-male a cappella group at Princeton University after a critic at the college’s newspaper blasted the song (and the group) for being “misogynistic and dismissive of consent”.

The original op-ed piece was titled “Dear Tigertones, please stop singing ‘Kiss The Girl'”, directly written to the male a cappella group by Princeton sophomore Noa Wollstein back in November. “By performing the song multiple times each semester, the Tigertones elevate it to an offensive and violating ritual,” the editorial piece says.

The editorial continues, “The premise of the song, originally sung in the Disney film The Little Mermaid, is that the male Prince Eric, on a date with the beautiful female Ariel, should kiss her without asking for a single word to affirm her consent. Despite the fact that an evil sea-witch cursed Ariel’s voice away, making verbal consent impossible, the song is clearly problematic from the get-go.”

Princeton senior Wesley Brown, who is also the president of the Tigertones, responded to the backlash by simply pulling the song “until we can arrive at a way to perform it that is comfortable and enjoyable for every member of our audience”, despite the performance of the familiar tune being a tradition for the group.

This is not the first mention of banning a song due to a deemed undertone of ‘lack of consent’. Just recently, a radio station banned the classic Christmas song “Baby, It’s Cold Outside” from being played on their station due to the song’s storyline lacking consent between the man and woman involved in the song.

This caused an uproar due to the fact that the radio station claimed that the viewers choose their Christmas lineup, but their polls reflected that 95% of listeners were in favor of keeping the song on the air.

Furthermore, the iconic Christmas classic Rudolph the Red-Nosed Reindeer was also deemed a homophobic and racist movie, originally posted by HuffPost. While the publisher claimed that the movie was ‘problematic’, many others commented to stop politicizing Christmas movies and just let them be.

The same could be said for The Little Mermaid. People are not happy about it.

Ok I have to say something about these songs people are protesting over. KISS THE GIRL???? REALLY??? Ariel knows she needs the prince to kiss her. She can't talk. She wants him to kiss her. Good Lord! #thelittlemermaid

She’s right; she knows what she needs to do and is on a mission to get kissed by the Prince. Did people forget that part?

One person actually compared the song to actual rap songs that people listen to on a daily basis talking about sex and, specifically, rape.

You can give consent in other ways. I'm sure it was pretty obvious that nearly THE ENTIRE MOVIE she wanted him to kiss her.

Some commenters even had some Twitter conversations about how there are other ways to give consent and it was fairly obvious that Ariel was consenting.

What do you think about this story? Be sure to SHARE this article with your thoughts!

Check out the full performance of “Kiss The Girl” by the Tigertones below.