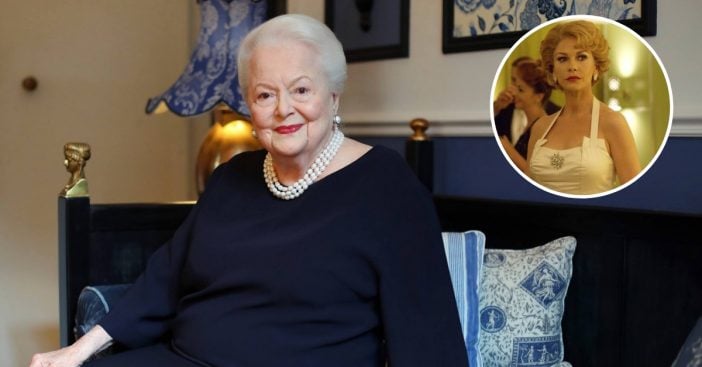 Actress Olivia de Havilland may be 104 years old, but she is still standing up for herself. Olivia is currently suing FX Networks concerning how she was portrayed in the series Feud: Bette and Joan. Olivia, a Hollywood legend best known for her roles in Gone With the Wind and The Heiress said she felt blindsided by the show. That is why she issued a lawsuit.

She said she was furious that she was never consulted and never imagined that she would be misrepresented in such a way. Her battle with FX Networks has been going on for over a year and a half and she is now asking for the Supreme Court to get involved. She is alleging that the network never got her permission and defamed her in the series.

Updates On The Lawsuit

She lost bids in a California appeals court last March and the state Supreme Court in July, so she now asks for The Supreme Court to hopefully pursue a jury trial. She says that the show misrepresents her as a “profane gossip” and made up storylines about her screaming obscenities at her sister, actress Joan Fontaine. Joan died in 2013 at age 96.

Other studios are watching this case closely. If Olivia does win this case, it could mean serious changes for networks and their shows depicting famous people. This isn’t the first time Olivia sued a network either. She sued Warner Bros. in 1943 (she was only 27 years old) over a restrictive studio contract. The studio blacklisted her but she ended up winning and her career still went on after that lawsuit. There is now a De Havilland Law which “prohibits the enforcement of personal services contracts beyond seven years.”

What Will The Supreme Court Say?

FX is currently also not backing down on the case. The Supreme Court could make a decision next month. Stay tuned for more on this case. Olivia currently lives a relatively quiet life outside of this drama and resides in Paris, France. She is one of the only living members left from the Golden Age of Hollywood.

Have you seen the show? Catherine Zeta-Jones played Olivia de Havilland in the series Feud. What did you think about her portrayal? Do you think Olivia is in the right by issuing a lawsuit to FX? She certainly still has a lot of pluck for her age which is great to see!

Check out one of the scenes that sparked Olivia suing FX Studios below: