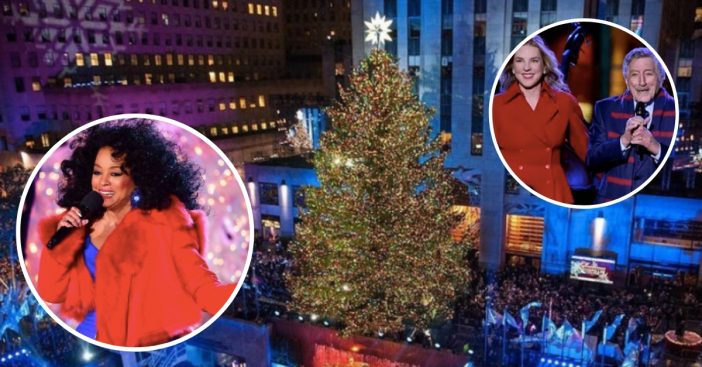 The 86th annual Rockefeller Center Christmas Tree Lighting that takes place in the heart of New York City every year was nothing short of entertaining last night. NBC showcased a 3-hour event spanning from 7pm ET to 10pm ET with performances by some of the most popular and most legendary names in Hollywood.

The musical acts led up to the official lighting of the Rockefeller Center Christmas tree, which stands at 72 feet tall this year, illuminated by a brand new star that is made up of 3 million tiny Swarovski crystals. However, the big moment of the tree lighting wasn’t the most talked-about event that occurred last night; it was the performers! We have the inside scoop for you.

Jazz singer Diana Krall and the legendary Tony Bennett teamed up to perform a few pieces together, which both seemed a tad unrehearsed. They both stumbled over one another’s lines due to missed cues, but continued onward with their songs like professionals. Many had some critique for the 92-year-old male singer, but at least he had fun throughout it!

The two sang “I’ll Be Home For Christmas” and “The Christmas Song” together. Krall also sang the classic “Christmas Time Is Here” tune, which could be recognized by Charlie Brown Christmas lovers everywhere. Krall was greatly criticized by viewers online for her performance.

Howie Mandel and his antics

Howie Mandel might have been the talk of the evening as he trolled the audience for the entire event, all while plugging his show Deal or No Deal. “Nothing says ‘Christmas’ more than putting a germophobe in a crowd of strangers,” Mandel stated as the camera landed on him from the show hosts.

He approached several people in the audience, one of whom was named Tom. Mandel asked Tom if he would like to have complete control over lighting the Christmas tree, and gave him a button to press that would apparnetly light up the tree. On a countdown from 5, Tom then pressed the button which lit up a tiny Christmas tree inside the window of Rockefeller Center. He also approached a young woman named Lexi, giving a ‘Christmas gift’ to her by helping her move up closer to the front row by using a bullhorn to direct people to move out of the way.

The legendary pop diva and former member of The Supremes performed a medley of Christmas songs to wrap up the tree lighting event. Some of the tunes in the medley included “Someday at Christmas,” “Wonderful Christmastime” and her own original song, “Home.” At one point in the performance, she was joined by a backing chorus.

For 74 years old, Ross really wrapped up the show quite nicely, performing like a true and talented professional.

Has 74 ever looked this good? Seriously @DianaRoss is STUNNING! Thank you for a wonderful evening💕 pic.twitter.com/ME8HRJinYe

Did you watch the Rockefeller Center Christmas tree lighting last night? Be sure to SHARE this article if you did!

Check out the highlight video of the official lighting of the Rockefeller Center Christmas tree below, featuring commentary from the designer of the star on top of the tree.