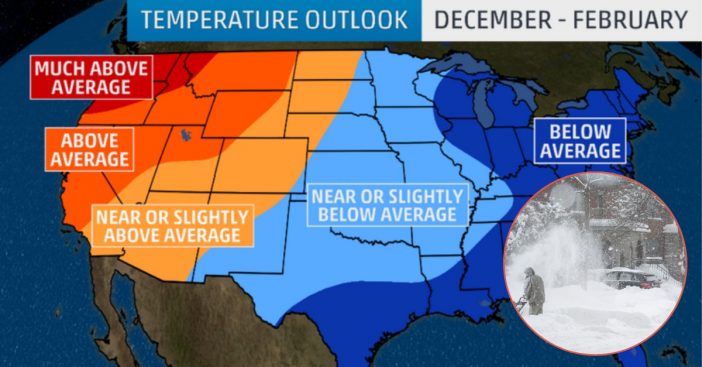 Snowfall has been occurring throughout sporadic areas of the United States for the last few months, but it’s been about three years since we’ve seen this much snow in November. For a majority of the country, this could only be a sneak peek into what the rest of the season will bring. The Weather Channel has confirmed that a majority of the country will experience “below average” temps while the northeastern part of the country will experience a “persistently cold” winter.

You’re probably wondering, where is all this frigid cold coming from? It’s actually the result of a jet stream hovering over the central part of the United States. According to AccuWeather, jet streams are responsible for directing weather changes across the globe, meaning if it plunges, so do our warm temperatures. Cue the snowfall.

The above photo depicts that upon the approaching of the 2019 year, the west coast will be above average to much above average for the beginning of the year. The east coast and even part of the south will be experiencing a below average cool spell, and it’s apparently predicted to reach its all-time lowest (and coldest) in February.

So, if you’re thinking of booking a vacation to a warmer destination, February might be your month to do so.

However, the Farmer’s Almanac (not to be confused with the Old Farmer’s Almanac) predicted nearly the same weather as The Weather Channel, so it, unfortunately, looks like a majority of the U.S. will be bundling up and sitting in front of a fire each night to stay warm.

While it’s important to keep up-to-date on your weather listings so you can plan your days accordingly, it’s also worth noting that weather predictions are only tentative and may change over time. United States citizens are no strangers to sporadic and ever-changing weather, and winter temperatures are no different.

As meteorologists learn more information about the upcoming months, we can expect to see clearer patterns and updates for all of us to utilize. And we’re certainly hoping it changes for the east coast, south, and midwest!

Let’s all hope for some warmth this year. If you live in an area that gets heavy snowfall annually, here are some tips on what to do if you get trapped in your car during a snowstorm.

Be sure to SHARE this article to spread the news about these Weather Channel predictions for the 2018-2019 winter season!

Check out the video below of an in-depth analysis of the winter weather predictions for this year!