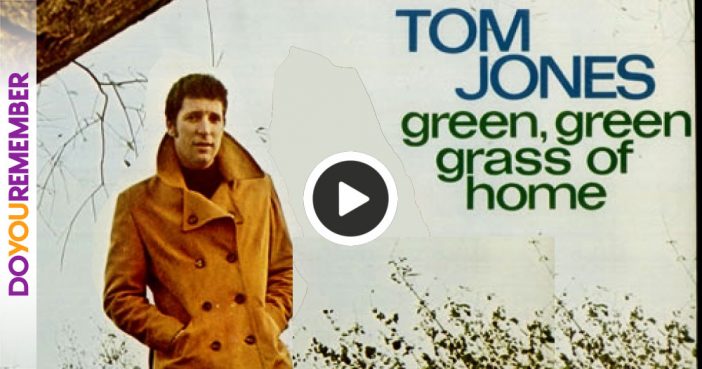 This Country song about a condemned prisoner who longs to escape to the green, green grass of home was inspired by a crime scene in the film The Asphalt Jungle. Nashville songwriter Curly Putnam wrote it in 1964 and it was initially recorded by country singer Johnny Darrell.

Tom Jones decided to record this after hearing a version by Jerry Lee Lewis, a legendary Rocker who had started making Country records. A year after Johnny Darrell’s original version, Lewis recorded this on his album Country Songs For City Folks. Jones recalled to The Mail On Sunday February 6, 2011: “I used to collect anything Jerry Lee Lewis recorded, and still do. I was in New York in 1965 when I bought his country album Country Songs For City Folks. Green Green Grass Of Home stuck out.

I got on well with Jerry Lee. I did have a bit of a dust-up with him one night in Vegas, but most of the time, we got on great. He came over to do a British tour in 1966 and I had just recorded the song. He told me he’d love to hear it, so I played it to him in his hotel room. Then he was knocked out with it and said: ‘You’ve done something different here, the arrangement is great. It sounds like a No 1 to me.’ I said: ‘I hope you’re right.’ He was.”

Jones discussed the song’s meaning with The Mail On Sunday: “I think the lyrical content is important here. The guy in the song is really in a jail cell, but you don’t know until the end. That got to me. Good God, it paints a picture and yet a lot of people who love Green Green Grass Of Home don’t even realise that. This is about a man who is going to be hanged and he’s just reminiscing on the precious parts of his life. It made me think of Wales when I recorded it – ‘the old home town looks the same’. When I went back to Pontypridd in those days, getting off the train from London, those words would ring true. It seems like a lot of people relate the sentiment to their home too.”

Tom Jones recalled hearing Jerry Lee Lewis’ version of this in 1000 UK #1 Hits by Jon Kutner and Spencer Leigh, “I said to my recording manager, Peter Sullivan, I’d like to record this. He said, ‘A Country song?’ I said ‘Yeah’ because I hadn’t done a Country song up to that point. Les Reed did the arrangement and played piano on the track and made it more of a Pop song than a Country song, because when Jerry Lee Lewis did it, it was strict Country. When I came back to England, I recorded the song on TV and we did it like in a jail. But you don’t know it is a jail until the camera pulls back and you see the bars, and there I am in this jail singing The Green Green Grass Of Home.”

This was Tom Jones’ biggest hit in the UK, selling 1,205,000 copies. It was the first Decca single by a UK artist to sell more than a million copies in the UK.

The old home town looks the same
As I step down from the train,
And there to meet me is my Mama and Papa.
Down the road I look and there runs Mary
Hair of gold and lips like cherries.

The old house is still standing tho’ the paint is cracked and dry,
And there’s that old oak tree that I used to play on.
Down the lane I walk with my sweet Mary,
Hair of gold and lips like cherries.
It’s good to touch the green, green grass of home.

Then I awake and look around me,
At four grey walls that surround me
And I realize, yes, I was only dreaming.
For there’s a guard and there’s a sad old padre,
Arm in arm, we’ll walk at daybreak.
Again I touch the green, green grass of home.

Yes, they’ll all come to see me
In the shade of that old oak tree
As they lay me ‘neath the green, green grass of home