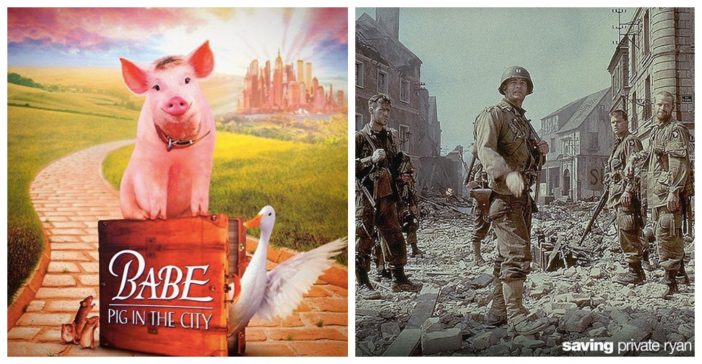 1998 was probably one of the last greatest years for film. It does not only include dramas and comedies but also animated films that remain one of the best even today in 2018. It also entails live action sequels, making it a notable time in film history and a bold statement for film directors at the time.

This list includes films by Steven Spielberg, George Miller, and John Lasseter. All age groups should know these films, and some may even remember when these came out. Here are the top 10 movies from 20 years ago!

The WWII epic has become a staple in most households these days as Spielberg’s nod to combat includes some of the best battle scenes and genius cliches. The movie stars the incredible Tom Hanks who plays Private James Ryan and the film is centered around a group of soldiers who enter the enemy lines to find Private Ryan, whose brothers have been killed in battle.

Jim Carrey stars in the film The Truman Show and it’s a great one. It is centered around a man named Truman Burbank. He’s desperately seeking attention as a comic performer but soon ends up starring in a show about his life, called The Truman Show. A live broadcast of Truman’s every move is caught on hidden camera and one of the characters is able to control Truman’s every decision.

A Bug’s Life is a timeless family classic that people both young and old can enjoy. The film centers around an ant named Flik who is constantly messing up daily life things for his colony. When he really messes up big time, he and his colony are forced to work together or face permanent termination. He is met by other circus clown insects that he believes will help save them all.

George Miller’s sequel to the original Babe was a bold decision for the film industry at the time, but still a hit. It features Babe the pig… in the city. Yes, you guessed it. Babe gets sent off to the city due to the Hoggett’s having to pay their debt somehow. On the adventure, Babe meets tons of new friends. It did not perform as well as its predecessor.

5. The Last Days of Disco

The Last Days of Disco was set in the early 1980s, featuring characters Chloë Sevigny and Kate Beckinsale. It definitely has a Saturday Night Fever kind of feel and the two main ladies of the film spent most of their time in the film in an exclusive nightclub in New York.

You can see more beloved movies from 1998 on the NEXT page!

Page Page 1 of 2
Previous article: Mom With Beehive Updo Gets A New Look That Makes Her Look 10+ Years Younger
Next Post: Prince Harry And Meghan’s Wedding Attire Will Be Displayed At An Exhibition