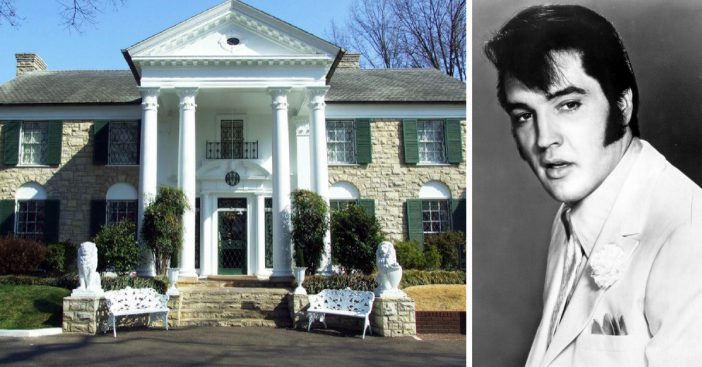 Elvis Presley purchased his famous Graceland estate when he was only 22 years old. He purchased it for $102,500 in 1957. It continues to be one of the most visited homes in the country because people still love Elvis and his legacy.

Here are some things you may not know about Elvis and the Graceland estates:

Elvis had a list of food items that he wanted every day and to be available at all times. Here are a few things that were on his shopping list: Pepsi, orange drink, sauerkraut, banana pudding (he wanted it cooked fresh nightly), ice cream (vanilla and chocolate), and ingredients for meatloaf and sauce. He clearly didn’t have the best diet in the world.

He had a large barn that held horses, but the most unusual pet he had was a monkey. His chimpanzee was named Scatter. Apparently, Scatter didn’t have the best behavior and would pull down women’s skirts and yell loudly all the time. Elvis dressed him up in costumes and apparently found his ill behavior funny. Eventually, he became too much to handle for Elvis and Scatter lived in a climate-controlled room in Graceland.

3. He used to watch three TVs at once

He watched a lot of television and would often have three TVs on at once. There were no remote controls at this time so he would shoot the TV set with a pistol to change the channel rapidly.

4. The upstairs was off limits to guests

His bedroom and master suite on the second floor was off-limits to guests. He was found dead in 1977 in his bathroom that is in the master suite. When the home was opened as a public museum of sorts in 1982, the second floor was also off limits. Still, no one is allowed in except close family members. The home remains the second most visited home in the United States, just after the White House. Over 650,000 visitors come per year.

That means this is the second most visited home in America. Over 700,000 visitors head to Graceland every year to check out Elvis’ iconic home. The only other home in the United States that gets more visitors and more attention? The White House!

Read on to the next page for even more interesting facts about Elvis and Graceland!