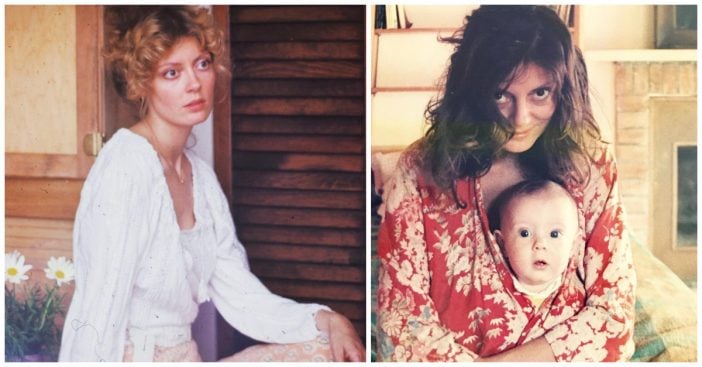 The story of Susan Sarandon’s unexpected pregnancy is sure to make your jaw drop. The incredible actress was well into her career when she found out she was going to have a baby.

And unexpected is an understatement! When Sarandon found out she was pregnant, she thought she wasn’t able to conceive.

It was back in 1983 when the actress was filming for the movie The Hunger. She experienced a serious medical scare that landed her in the hospital. Sarandon was diagnosed with endometriosis, and doctors told her she would not be able to bear children.

Doctors advised her that if she ever wanted to have children, it may require certain precautions and even surgery. Sarandon brushed it off, since she didn’t have any interest in having children at the time. She was quite happy with her life and career as it was.

Shortly after Sarandon traveled to Italy to work on a film, she met a young Italian man named Franco. They barely knew each other and their relationship definitely was not serious. She was 38 when she found out she was pregnant with Franco’s child.

She decided to have the baby and told Franco he could be as involved as he wanted to be. In March 1985, Eva Amurri was born.

Sarandon gave birth to two more children in the years after Eva was born. She does not regret her surprise pregnancy for a second, and believes that everything happens for a reason. She’s sure right about that!

Despite her career going well and being at the top of her game, she knew she had become a mother for a reason. It led her to a life of love, happiness, and family.

Today, Eva is all grown up and has two kids of her own!

Did you know this little fun fact about Susan Sarandon? Share this around with your friends and family to see if they knew!

Previous article: 9 Old Restaurant Chains That We Wish Were Still Around Today
Next Post: ‘Pretty Woman’ Scriptwriter Reveals The Original Plot Of The Hit 1990 Movie