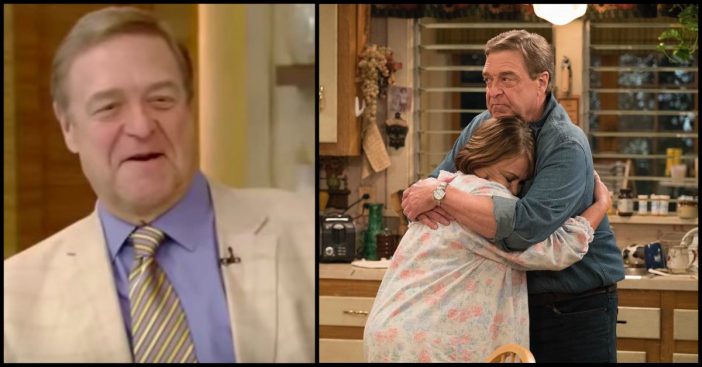 In case you’ve somehow missed it, the hit sitcom Roseanne came back, for a bit!!  The show, which originally ran from 1988 to 1997 returned to screens with new episodes on March 27, 2018. Now the show has undergone a facelift, being called The Connors since the departure of Roseanne Barr.

Roseanne, which features a working class family living in Illinois, was a hit among people all over the country when it initially aired. After seeing the success of other rebooted shows (like Fuller House and Will & Grace), ABC greenlit the Roseanne revival.

Much of the original cast returned to the show, including Roseanne Barr (for a time), John Goodman, Laurie Metcalf, Michael Fishman, Sara Gilbert, and Lecy Goranson.

Needless to say, people have been going crazy for the revival of the hit show. The cast has been going on various talk shows to discuss Roseanne, and recently it was John Goodman’s turn.

On the May 7, 2018 episode of Live with Kelly and Ryan, John Goodman made an appearance and spoke about how incredible it’s been to be working on the show again.

John explained that although he doesn’t feel like he’s gone back in time when he’s on the set, it does feel somewhat surreal.

Production recreated the entire set exactly as it was before the show went off the air — right down to the wallpaper and the props — and it’s uncanny to see the cast back there again.

John told Ryan and Kelly that the first time he was on the set by himself, he got chills.

When Ryan brought up the fact that the production team had to go on eBay to buy back some of the original props, John couldn’t help but laugh.

Ryan then brought up seeing a note in the freezer, and John explained what exactly the letter said and why they store it where they do. Apparently, one of the cast’s favorite places to hide silly items is in the freezer!

If you miss the old Roseanne, watch some John Goodman highlights below!

RELATED: The Cast Of Cheers Reunites Tonight On ‘The Goldbergs’

Click for next Article
Previous article: Ten Of The Most Expensive Original ‘Star Trek’ Memorabilia Ever Sold At Auction!
Next Post: Meghan Markle Proves She’s Just Like The Rest Of Us By Doing Her Makeup In The Car