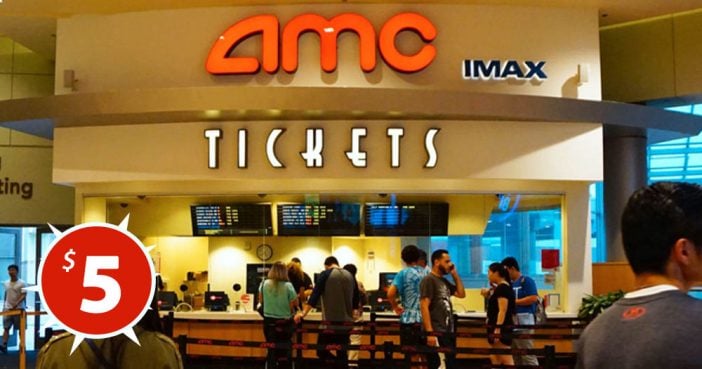 This story was originally written by Christopher Parish for whdh.

Movie buffs, rejoice: a night at your local theater just got cheaper!

AMC Theatres, the largest movie theater chain in the country, says its $5 “Ticket Tuesdays” deal is here to stay.

The promotion, which was originally slated to only be available for a limited time, is now permanent, the company announced.

All you have to do is join their free AMC Stubs loyalty program.

$5 Ticket Tuesday is here to stay for AMC Stubs Members. Better yet, it's now available online! Get tix: https://t.co/6ydnw0BPRQ pic.twitter.com/8VFeH3HOeq

Whereas before, guests could only get the discounted price at the box office, anyone can get $5 tickets online or in person.

And that isn’t the only deal AMC is offering. You can also purchase their $5 Cameo Combo on Tuesdays, which gets you a small popcorn and small drink for – you guessed it – $5. No coupon is needed.

A movie, popcorn, and drink for $10? For once, a night at the movies won’t break your bank account.

Top 25 Movie Quotes According To The American Film Institue

(How many do you remember?)

GONE WITH THE WIND

2. I’m gonna make him an offer he can’t refuse.

3. You don’t understand! I coulda had class. I coulda been a contender. I could’ve been somebody, instead of a bum, which is what I am.

4. Toto, I’ve a feeling we’re not in Kansas anymore.

THE WIZARD OF OZ

9. Fasten your seatbelts. It’s going to be a bumpy night.

11. What we’ve got here is failure to communicate.

12. I love the smell of napalm in the morning.

14. The stuff that dreams are made of.

16. They call me Mister Tibbs!

IN THE HEAT OF THE NIGHT

20. Louis, I think this is the beginning of a beautiful friendship.

21. A census taker once tried to test me. I ate his liver with some fava beans and a nice Chianti.

THE SILENCE OF THE LAMBS

THE WIZARD OF OZ

Previous article: 20 Wonderful Ideas For Your Old Jeans
Next Post: The Real Story Behind Johnny Cash And His Iconic Song, “Ring of Fire”