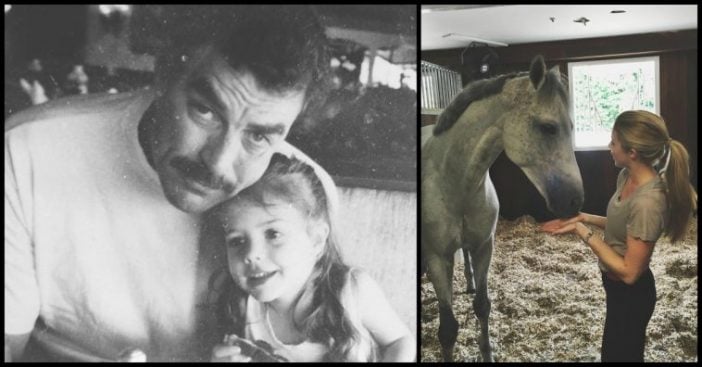 Tom Selleck is one of the most beloved actors out there. The 74-year-old has been acting since 1965, and his career has been truly incredible. Selleck had his big break in 1980 when he landed the role of Thomas Magnum in Magnum, P.I. He went on to play Dr. Richard Burke in Friends, A.J. Cooper in Las Vegas, and Frank Reagan in Blue Bloods. Throughout the years, he’s guest-starred on a number of other television shows, appeared on Broadway, and acted in commercials.

In 1987, Tom Selleck married Jillie Mack. A year later, on December 16th 1988, Jillie and Tom welcomed their daughter, Hannah Margaret Selleck. When it came to raising a family, Tom knew he wanted to expose Hannah to the wonderful outdoors.

When Hannah was born, Tom and Jillie moved to a 65-acre ranch in California. Tom scaled back his acting career in order to spend more time with his wife and daughter.

While living at the ranch, Hannah Margaret got her first experience with horses. According to CountryLiving, Hannah rode her first horse when she was only four years old.

When she was 14, she got really serious about horseback riding.

After graduating from college, Hannah decided to pursue a professional horseback riding career. She started entering serious competitions and she opened her own boutique horse breeding stable.