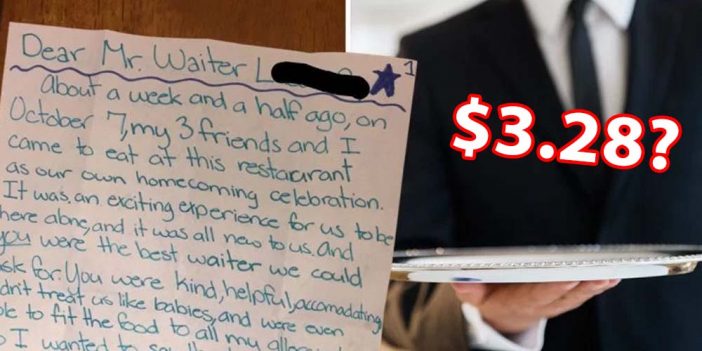 Being a waiter is often a thankless job. Customers are sometimes riding, sometimes they’re picky eaters, and sometimes they leave huge messes behind. The worst thing a customer can do, though, leaves a ridiculously small tip or even no tip at all. In a country like the United States where it’s customary to leave tips that correspond to 16-20% of the bill, for a waiter who has worked really hard to please the diners, receiving no tip can be a very frustrating experience.

But it’s not always done out of malice or stinginess. Sometimes the customers are simply not aware of the custom.

Recently, a Reddit user and waiter by the name of Seminole shared his story of how one group of young teens made this ultimate faux pas, only to later correct their ignorance in pretty much the sweetest way possible. Seminole sets the scene for us; a gaggle of 13-year-olds walk into the restaurant in which he works, clad in homecoming dance attire.

He says that the kids were a gracious group; they were amiable and even thanked him “profusely” as they exited after their meal, but once the waiter went back to the table, he was met with quite the disappointing sight—a $3.28 tip. We don’t know what the final bill added up to, but we’re sure it was more than 15 bucks!

In the Reddit post, Seminole expressed his initial frustration towards the situation, but once he saw what was waiting for him at the restaurant’s front desk days later, his attitude quickly changed.

In an envelope was about “18 bucks and change” along with a handwritten note from none other than the group of Homecoming-bound teens. Talk about a surprise!

The author, who speaks on behalf of the entire group, explains that she and her three friends received great service. In fact, they all agreed that he was the “best waiter” they could ask for.

She expressed their appreciation for not being “treated like babies,” despite their young ages. It was their first experience eating at a restaurant without adults and—thanks to Seminole—it was a good one!

The teen also said that she and her group felt “HORRIBLE” when they realized that their paltry tip was nowhere near the customary 18%. Here’s the two-page letter where the teens explained themselves:

Next day, however, he received this letter:

The waiter was quite taken aback by the teen’s actions. It wasn’t something that he’d ever expected to happen, so he was overwhelmed by their thoughtfulness. This is what he wrote back to them:

“Nothing more frustrating than when I get little to nothing for a tip and the customer is smiling and thanking me profusely as they exit.

“These kids came back another day and left this for me at the front desk, with $18 and some change. I’ve been serving a long time, and nothing like this has ever happened to me, or anyone.

“I don’t know how you learned or educated yourself on tipping, but I really appreciate the effort and kindness. I hope your Homecoming was fantastic!”

The heartwarming letter, shared by Seminole on Imgur, quickly went viral. It was viewed more than 149,000 times, and people were commenting on how good a job the parents did raising those kids.