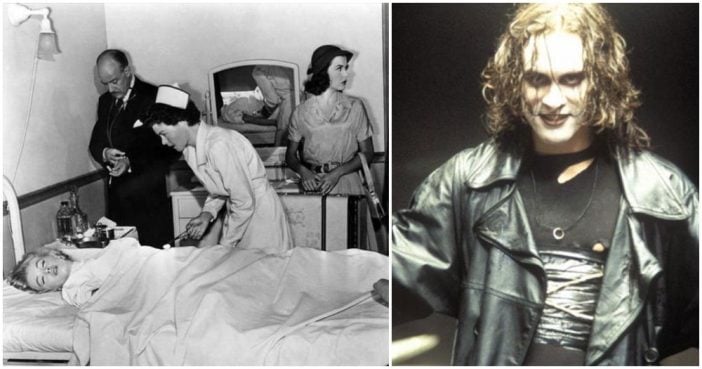 The charmed lives of old Hollywood stars often ended in ways that were anything but glamorous. While we may sometimes wish for the life of a celebrity, these nine Hollywood deaths are nothing to envy.

Which of these Hollywood Deaths had the biggest impact on your life? This story was originally published on the-line-up and thetalko.

Natalie Wood was a star at an early age, appearing in the 1947 holiday classic Miracle on 34th Street and Rebel Without a Cause from 1955. She was well known for being afraid of deep water, making her death by drowning in the Pacific Ocean in 1981 especially tragic. The circumstances are still murky. She was on her 60-foot yacht, anchored off California’s Catalina Island. On board with her were her husband Robert Wagner and fellow actor Christopher Walken (who was co-starring with Wood in a sci-fi flick at the time).

The ship’s captain tells a story of heavy drinking and loud fighting on board that night. In the early hours of the morning, Wagner discovered his wife was missing. Six hours later, her body was found floating face down. She had been wearing a jacket over her nightgown and socks. The ship’s inflatable dinghy was found washed up on rocks nearby. Despite a number of theories, this exact circumstances of Wood’s death have never become clear. In 2018, investigators officially named Robert Wagner a person of interest in Natalie Wood’s death.

The silent-film star was found murdered in 1968 in his Laurel Canyon home. Two young men had called him, offering their services. Novarro had previously hired prostitutes to his house, and the men were able to get his number from previous visitors.

Prosecutors say the men believed there was a large amount of money in the house and tortured Novarro for hours to reveal where it was hidden. They left with only $20, from Novarro’s bathrobe. Novarro died, choking on his own blood.

The original TV Superman was found in the bedroom of his Benedict Canyon home in 1959. He was dead from a single gunshot wound to the head. The official ruling was suicide, but several of his friends and fellow actors strongly believed Reeves was murdered by the Mafia.

Others still believe that his death was the mistake of a drunken accident, brought on by an argument with friends and his fiancée, Leonore Lemmon. The 2006 movie Hollywoodland explores the controversy.

Mansfield was one of Hollywood’s most famous sex symbols in the 1950s. She was the first major American actress to appear nude in a motion picture (Promises! Promises!). Mansfield led an intensely—perhaps even too intensely—glamorous life. Toward the end of her tragically short career, Mansfield was beginning to encounter a great amount of scorn for manufactured publicity stunts, including wardrobe malfunctions. Nonetheless, her stunning death shocked family and fans alike.

Mansfield died in 1967 when the car she was in plowed into a truck. Police photos showed the top of the car sheared off, with blonde hair tangled in the smashed windshield. That led to rumors Mansfield had been decapitated. In fact, it was only Mansfield’s blonde wig in the photos. Mansfield, her attorney Sam Brody, and driver Ronnie Harrison were all killed upon impact. Mansfield’s three young children in the back seat survived with minor injuries.

Isadora Duncan was a dancer, and so it may be a stretch to link her directly to the world of Old Hollywood. Yet her glamorous life and unusual death earn her a spot on this list. The internationally-acclaimed American dancer was driving in Nice in the south of France in 1927 when she was killed by her silk scarf. Mary Desti, the mother of American film director Preston Sturges, had gifted Isadora the scarf, a remarkable accessory hand-painted by a Russian artist. The scarf was so long that it could reach the rear wheels of the car. Cars in those days had spoked wheels. Tragically, the scarf became entangled, yanking Duncan out of her seat and strangling her. Gertrude Stein’s mordant comment was, “affectations can be dangerous.” Duncan is buried at the famous Pere Lachaise Cemetery in Paris.

Despite her early death, Duncan had an immense impact on the world of dance. Without her penchant for more free movement in dance, modern dance may have been a much longer time coming.

Elizabeth Short wasn’t famous for anything she did in life but for the gruesome circumstances of her death. Like so many young women of the era, she headed to Los Angeles to become an actress. She was murdered before she ever got the chance. Her naked body was found in a vacant lot, severed at the waist and completely drained of blood.

Elizabeth’s face was sadly slashed from ear to ear. Her nickname may have come from the film The Blue Dahlia, starring Veronica Lake, released the year before her murder. One of the most famous Hollywood murders, it was never solved, despite movies, books, and amateur interest in the case.

The Mexican-born actress was pregnant when she committed suicide in 1944 by downing sleeping pills and brandy. In her suicide note, she said she would rather die with her baby than suffer the shame of raising him as an illegitimate child.

The 1959 tell-all book Hollywood Babylon claimed that Vélez didn’t actually die from the pills. The author claims she got out of bed to vomit, stumbled in the bathroom, hit her head, and drowned in the toilet. A more lurid story, but not true.