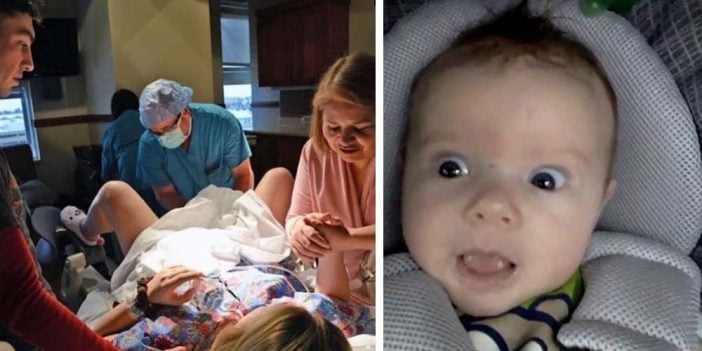 In-laws can be a blessing or a curse. You expect the worst and pray for the best, but many a time, luck is not always in your favor. You have to deal with so many scenarios involving them. Having to pick and choose who goes where and when? But the delivery room is where some draw the line. In-laws and delivery rooms. Now there’s a touchy subject! Ah yes, the delivery room. Where everyone in your immediate and extended families feels they belong, to watch the birth of YOUR child, and have no problem telling you so. To be sure, it can be a battle. But in a recent “Dear Prudence” advice column, one mother-in-law took her delivery room demands a little too far. Like WAY too far.

Writer Nicole Cliffe often finds controversial tidbits like this online and shares them on her Twitter account. So when she came across the “advice” this mother-in-law was asking Slate‘s Dear Prudence for, she had to share it with the world.

“My son, Steven, and daughter-in-law, Julia, are expecting their first child and our first grandchild next month,” the woman, dubbed “Second-Class Grandma” begins in the column. “I had what I thought was a good relationship with Julia, but I find myself devastated. Julia has decided only Steven and her mother will be allowed in the delivery room when she gives birth.”

Which is not totally unheard of, is it? Most women I know feel a thousand times more comfortable with their own moms. And most hospital delivery rooms only permit two people in there with you — your birth partner, and a guest of choice. That’s how mine operated, anyway. Well, Grandma wasn’t having it.

“I was stunned and hurt by the unfairness of the decision and tried to plead with her and my son, but Julia says she ‘wouldn’t feel comfortable’ with me there,” she writes. “I reminded her that I was a nurse for 40 years, so there is nothing I haven’t seen. I’ve tried to reason with Steven, but he seems to be afraid of angering Julia and will not help. I called Julia’s parents and asked them to please reason with their daughter, but they brusquely and rather rudely got off the phone. I’ve felt nothing but heartache since learning I would be banned from the delivery room.”

So. True. While I will say my own mother-in-law was in the room with me, and she is also a nurse, she’s also the closest thing I have on this planet to an actual mother and it was a last minute decision to invite her. But my husband and I were terrified and I just needed a mom, you know? But poor Julia in this story ALREADY HAD ONE, and her mother-in-law is behaving rather beastly about it.

Previous article: Just Released: The Trailer For Elvis’ Granddaughter’s New Movie
Next Post: Guy Uses 42,000 Matches To Build A Giant Sphere And Then Sets It On Fire