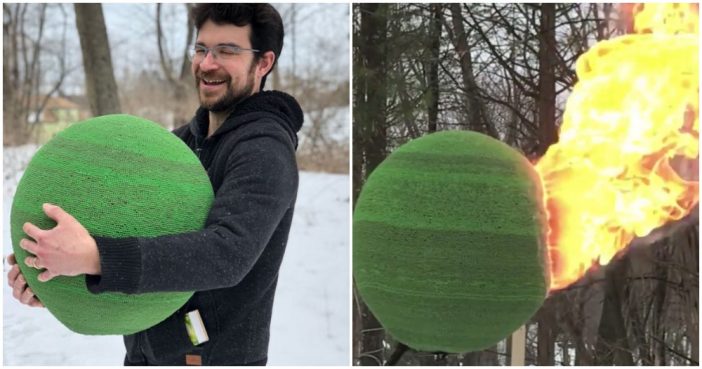 In the last 365 days, I feel like I’ve accomplished quite a lot. I bought a new car, got engaged, had a few vacations – so all in all, I’d say it’s been an eventful and successful year. However, this man has spent the past year gluing together 42,000 matches and lighting them in a glorious Giant Sphere of fire. One day, Wallace K was playing around with matches when an insane idea popped into his mind. Now, most people would have just left it there and let it remain as idle chat, but not this hero among men.

Nearly a year after coming up with this, Wallace’s idea had taken the internet by storm. It’s the perfect combination of being SO nerdy, and mind-blowingly awesome (kinda like an Avengers movie). Wallace’s project involved gluing 42,000 matches together to create a giant sphere and then setting it on fire.

“It took about ten months and I think the cost was around $500.”

“I was playing around with matches one day and thought about how the heads of matches are slightly larger than the bodies. It got me wondering what would happen if I started gluing them together and never stopped. I imagined a giant sphere would form so I set out to find out.”

As I started the project I was very interested in trying to figure out approximately how many matches I would need. I was buying them in boxes of 300 from my grocery store (I am sure they thought I was crazy) and needed to know if I was about to break the bank. I started playing around in the modeling software Rhino to get a sense of what this match sphere would ultimately become.”

And here’s the boring part…

“I modeled the damn thing but my computer couldn’t render it. I had to keep cutting away parts until I stopped running out of memory. For your pleasure, here is a quarter of the sphere rendered in virtual reality.”

“Then the gluing began! I think the best way to describe this process is to articulate my mental and emotional state while gluing matches together for hours upon hours.”

This photo was taken at a time of excitement and optimism. My theory was working and the curvature of the sphere was beginning to take shape!”

“This photo marks a turning point in my euphoria to a strong understanding of just how much time, energy, and matches were going to go into this sphere. The shape was coming out nicely but it was taking a long time just to get a single layer of matches glued on. I was adding them in a circle that just kept growing and growing and yet not growing nearly as quickly as I would have liked.”

“Early on I realized that aligning matches so that the heads were all sitting in the same direction helped me glue them up much much faster. I could grab about 7 matches at a time and hot glue them to the globe.”

“The joy of nearing the halfway point here was doused by the fact that I was using boxes of 300 matches and a single box wouldn’t even get me a single layer of growth. The middle was a depressing time.”

“But I kept going! And it kept growing! And it started to look less like a sphere and more like a child’s approximation of a sphere. I had to let go of the idea of perfection when I saw that I hadn’t been able to maintain a perfect growth just by eyeballing the placing of the matches.”

“I guess I could have templated the curvature and really tried to nail it but I was so far past the point of caring that I just wanted to get it done.”

“So close but so damn far. It also got harder to place the matches as I had to reach inside the curve. Also, it should be noted that I was doing all this work in a metal shop so it was a lot of fun to keep sparks away from this. Huge thanks go out to my bosses and coworkers who put up with me making this in their space!”

“I love this photo and it shows how funky the sphere gets by the end. It didn’t remain a perfect globe but it certainly turned into something cool to look at.”

“I kept all my empty boxes of matches in order to get an estimate of how many I used in the end. I finished with exactly 140 boxes of matches that went into this project. If they all actually had exactly 300 matches in them, that equals 42,000 matches. This was significantly off from my 62,654 match estimate but many factors could have contributed to this: Maybe there aren’t exactly 300 matches in each box. Maybe I didn’t make a perfect sphere (I didn’t). Maybe matches are different sizes (they are). Still, 20,000 matches is a significant margin of error. So much for accuracy.”

“And this is what you get. Turns out all green matches are not exactly the same color and I have no idea why they shifted the way they did. The potential energy here was very palpable. All in all this thing took approximately ten months to create chipping away at it during evenings and weekends. Totally worth it.”

And my mother told me never to play with matches!

Would you create a giant sphere and light it on fire? Don’t try this one at home.

Previous article: Mother-In-Law Whines To Strangers About Not Being Allowed In Delivery Room Gets Put Her In Her Place
Next Post: Here’s What Little Tabitha From ‘Bewitched’ Looks Like Now