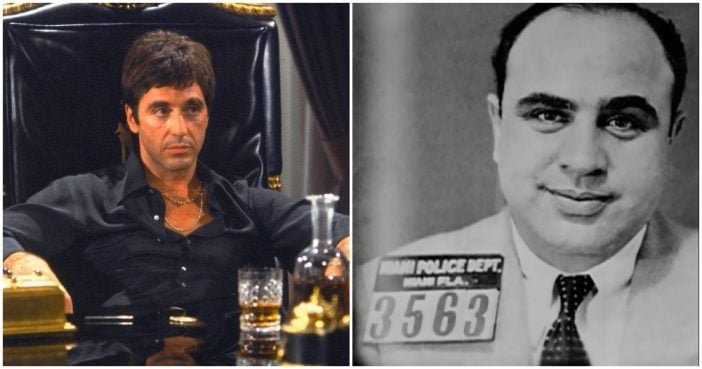 Al Pacino, Tony Montana himself, described the allegorical 1980s gangster movie Scarface best when he said, “It was a lot of movies. You go to a movie, you get a lot of movie with Scarface.” So what is Scarface about, for the six of you who haven’t seen it? It’s the story of a Cuban immigrant who shoots and screams his way up to the top of the Miami drug game, only to crash and burn. As with many an epic movie, there are a plethora of larger than life behind the scenes Scarface stories.

Scarface quotes fill the front of t-shirts and posters in dorm rooms, and basically, every good rapper has to spit a line or two about the film. Yet, the movie was absolutely destroyed by critics and was only a modest box office success when it was released in 1983. However, the time has been good to Scarface; the film has taken on a cult status reserved only for a rarified few.

You would think that Al Pacino would favor his other iconic gangster character, Don Michael Corleone from The Godfather, over Tony Montana. You, of course, would be wrong. You big silly idiot, you. Scarface is actually the actor’s favorite movie. And he has a pretty deep bench to choose from.

So why does Pacino have such a fondness for this over-the-top gangster movie? Once you read these pieces of Scarface trivia and facts, the answer should become obvious.

1. The Film Is Now A Classic

The 1983 film Scarface was written by Oliver Stone and directed by Brian De Palma. The movie centers on Tony Montana (Al Pacino), a Cuban refugee who moves to Miami, Fla., in the 1980s and becomes a powerful drug lord. Mary Elizabeth Mastrantonio, Steven Bauer, and Michelle Pfeiffer also starred in the film, which made $44 million at the box office. The film, which received mixed reviews upon release, was a remake of a 1932 movie of the same name and similar premise. Today, Scarface is one of Hollywood’s most iconic films, just as Al Capone is one of history’s most iconic gangsters.

2. How The Real Scarface Got His Nickname

Al Capone received his famous nickname after getting into a fight in 1917. Capone insulted a woman at the Harvard Inn in Brooklyn, NY, and her brother slashed Capone’s face as retribution, giving him several scars. Capone was embarrassed by the deformity and often tried to hide the scars when he was being photographed. He also claimed he received them during the war even though he never served in the military. When Capone became a famous mobster, the press started calling him Scarface, which he hated. His criminal colleagues called him “Big Fellow,” while friends called him “Snorky,” another word for “spiffy.”

3. How Tony Montana Got His Name

Tony Montana’s name came from the screenwriter’s love of professional sports. Oliver Stone was a huge San Francisco 49ers fan, so he decided to name the titular character in his movie after his favorite football star, Joe Montana. Joe Montana won four Super Bowls and was named Super Bowl Most Valuable Player three times (the first one to ever do so). In the film, Tony is called “Scarface” only one time — and not in English. When Tony is threatened with a chainsaw by Colombian gangster Hector, the rival calls him “cara cicatriz” in Spanish, which means Scarface.

In both Scarface films, the main character was based on Al Capone — one of history’s most notorious mobsters. Both Tony Camonte (from the 1932 film) and Tony Montana (from the 1983 film) were depicted as big-time mafia bosses. Each had hits put out on them, and both had giant scars on their faces, thus earning them the nickname “Scarface.” Montana was killed in dramatic fashion — he was gunned down by a sea of bullets. Capone died much more quietly. He spent the last few years of his life living in a mansion in Florida before he died of a heart attack.

When the government cracks down on an illegal substance, certain segments of the population will do anything to get it, regardless of whether it’s legal or not. Both Al Capone and Tony Montana took advantage of federal laws that banned certain substances from the general public. For Tony Montana, the war on drugs and crackdown on cocaine helped him rise to power. For Capone, Prohibition helped him create a black market for alcohol, prostitution, and drugs. Both mobsters provided people with what they wanted even though their actions were illegal. Users and addicts will do whatever they must to get a fix.

6. The Chainsaw Scene Was Based On A Real-Life Event

One of the most memorable scenes in the 1983 film is when a Colombian gangster named Hector the Toad threatens Tony Montana with a chainsaw and dismembers his associate, Angel, in a gruesome manner. The scene is actually based on something that occurred in real life. Screenwriter Oliver Stone came across a similar incident while doing research for the film. He uncovered some FBI and DEA files and discovered that a chainsaw incident happened during the war on drugs. Even though the chainsaw was invented in 1830, Al Capone was never credited with using the device to intimidate his rivals.

7. Capone & His Gang Were Filthy Rich

Capone became head of what he dubbed “the outfit” in 1925, taking over for Johnny Torrio, a former Brooklyn mobster. He was just 26 years old. Capone’s crime syndicate earned an estimated $100 million a year. The majority of his money came from bootlegging. He also cashed in on gambling, prostitution, racketeering and other illegal activities. Capone enjoyed wearing fancy clothes and schmoozing with the media. He never made excuses for what he did to earn money. He once stated: “Ninety percent of the people of Cook County (Chicago) drink and gamble and my offense has been to furnish them with those amusements.”